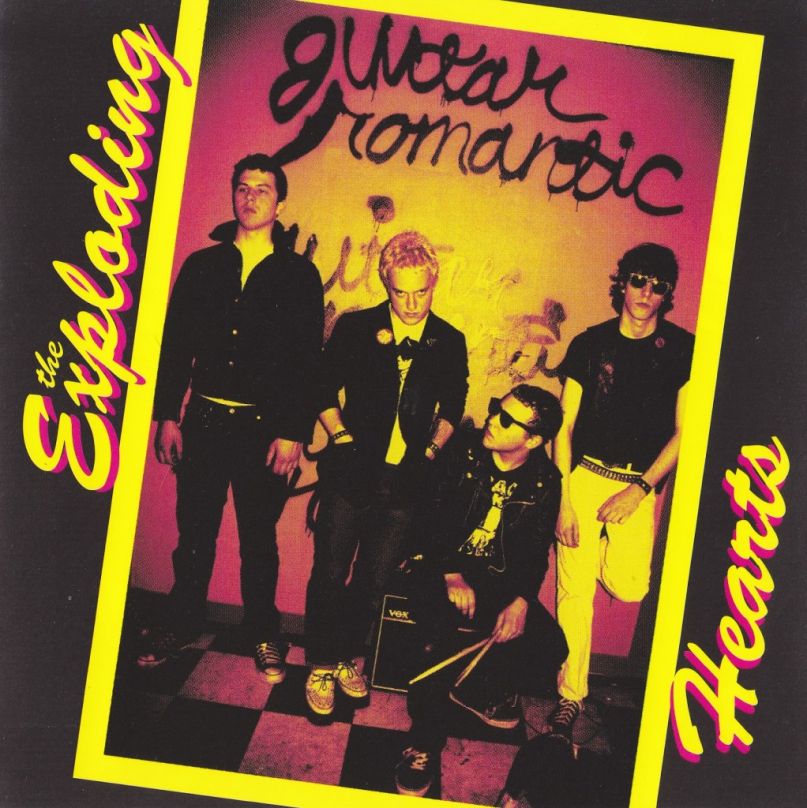 I find it hard to listen to the Exploding Hearts without hearing some haunting melody from the past. It’s a fleeting, ghostly hum that must have crystallized during the Portland power-pop band’s final moments. At least that’s how I imagine it. I imagine the sound of eternal youth and wasted promise embodied by the Hearts’ lovelorn songs from a decade ago suddenly spilled across an innocuous stretch of Oregon’s Interstate 5 on a Sunday morning. Or perhaps what I’m hearing is just an echo from the long, sickening silence that trembles in oblivion’s wake.

The horrific crash that killed three of the bands’ four members on July 20th, 2003 happened when the group’s tour van flipped as they raced back home from the Bay Area. It was just weeks before they were to embark on their first national tour behind a looming record deal. It was just 110 days after the Hearts released their infectious debut album, Guitar Romantic, which celebrated its 10-year anniversary this month.

The accident rattled Portland’s music scene and has since stirred speculation surrounding the band’s legacy among a small – but growing – group of critics, tastemakers and rock and roll enthusiasts. And while it marked a sudden end to one of the best punk acts of the last decade, it all but ensured the Hearts’ immortality. Like degenerate James Deans, the lives of singer/guitarist Adam Cox, 23, bassist Matt Fitzgerald, 20, and Jeremy Gage, 21, ended in a kind of beautiful tragedy. They’d never have to shed the sneers, the leather jackets or the hot pink and yellow hues that punctuated their garish look. Nor would they ever endure the indignities of a bearding baldness framed by designer-rimmed glasses. The Exploding Hearts will forever be Portland punks, spared from the naval gazing of Portlandia.

Turning back the dial a decade, the shameless power-pop of Guitar Romantic sounds so refreshing, yet so out of place for its time. Punk rock had spent years mired in the galloping, supercharged sound of California pop hardcore (see Epitaph/Fat Wreck Chords). The Strokes and the White Stripes were grappling for the soul of a manufactured rock and roll revival with insufferably cool detachment. Meanwhile, a slew of precious indie acts seemed to blossom overnight, marking a shift in the cultural zeitgeist.

Remember The Shins, Cat Power, Sufjan Stevens and The Postal Service? Critics creamed their jeans over those records that year. And, perhaps more importantly, 2003 was when the Decemberists – who, like the Hearts, came out of Stumptown – cut one album bursting with saccharin songwriting and reissued another. Castaways and Cutouts and Her Majesty The Decemberists would go on to make Colin Meloy the Patron Saint of Portland. They’d lay claim to being a defining sound of the city. They’d play as a soundtrack for the burgeoning creative classes on both coasts.

In the midst of this prosaic medley, Guitar Romantic stands as a remote island of sound, dishing up waves of bubblegum riffs, rippin’ guitar solos and honest-to-goodness angst. It was as if someone had transmitted tunes by the Buzzcocks, the Nerves and the Real Kids into outer space only to have them return to earth – jacked up and dripping with fuzz – 25 years later. The songs rollick like a dirtier version of Cheap Trick and distill the pop sensibility of the Jam and Nick Lowe.

The album is so firmly rooted in rock and roll’s best traditions that it almost seems timeless. “Nothing was new about this album,” wrote Nick Sylvester for Pitchfork in 2003. “But everything was better.” Tunes like “I’m a Pretender” and “Sleeping Aides and Razorblades” have the full-throated swagger birthed by Chuck Berry. The I-IV-V chord progressions of “You’re Black and Blue” and “Jailbird” are as inescapable as the hooks on “Modern Kicks” and “Throwaway Style”. And there’s no shortage of stylistic samplings. At times, the album feels as though Cox and lead guitarist Terry Six (the band’s sole survivor) freebased every worthy rock band between the Who and Generation X. What they produced was potent strain of rock and roll, one whose essence can now be heard lingering throughout the tunes of King Tuff, Audacity, Nude Beach, Biters, Pujol, the Tough Shits, Mean Jeans and other great punk and power-pop groups.

The Hearts’ simple, stylish arrangements manage to both elevate and balance out the unhealthy doses of hedonism and heartache unleashed through their lyrics. At its core, Guitar Romantic is a lovelorn catalogue of doomed relationships and the vagaries of adolescence – vicious rumors, conspiring friends, other boys or simply the change in seasons – set to superb melodies. “I helped you pack your station wagon / saw you off back to Seattle,” sings Cox in “Throwaway Style”, which traces the end of a steamy summer fling. “You said it’d break his heart if he finds out / but girl he’s gonna find out what love is all about.” Cox’s crooning should resonate with every reject or hopeless romantic who ever set foot in a rock and roll high school, or wished they could. Hand in hand with heartbreak is a relentless urge to get fucked up, a la the refrain in “Jailbird”: “I got some [glue] sniffing to do/ To get as high as you.” Often, the album’s soul-crushing defeatism is only heightened by hours of boredom and bedroom meditation. Cox’s singing would come across as sophomoric or irreverent, if it wasn’t so sincere, self-effacing and backed by his band’s big-league shredding.

Everything about that album worked, and the Hearts were flying sky high from the moment they released it until the very end. They had enjoyed months of mounting buzz from hype machines such as Pitchfork and Maximum Rock and Roll. They had been batting eyes with Berkeley’s Lookout! Records, whose roster had boasted the likes of Rancid, Operation Ivy and Green Day. And they’d just slayed a pair of now-legendary shows at the Bottom of the Hill and Thee Parkside in San Francisco before hauling balls back to Portland the night of July 19th.

They were 90 minutes from home when their van flipped and rolled twice. Suddenly, Fitzgerald, Gage, and Cox were laying lifeless on the freeway. Just north of Skate World and the Gateway Mall. Just past the McKenzie River and about 11 miles from where I grew up in Eugene. The sun had just started to peek above the Coburg Hills to the east by the time they were dead.

The tragic timing – and the lives cut short – is the stuff of rock and roll legend. And legends never cut a shitty album. They never stop sniffing glue. They never mend a broken heart.

Shane Dixon Kavanaugh is an Oregon native, a punk rock poseur and crime reporter with the New York Daily News, and is also on Twitter.

Previous Story
Zoo Story: When Should We Moralize About Music?
Next Story
The Day Room: Cold Cave and the Humanity of the Artist
Popular
More Stories
[fu-upload-form form_layout="media" title="Submit Your Photo"][input type="hidden" name="ugc" value="1"][/fu-upload-form]