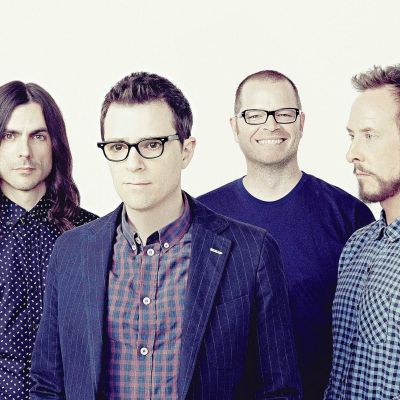 After signing to Geffen Records in 1993, the band released their self-titled debut album, also known as The Blue Album, in 1994. Backed by successful music videos for the singles "Buddy Holly", "Undone -- The Sweater Song", and "Say It Ain't So", The Blue Album became a triple-platinum success and received critical acclaim. Weezer's second album, Pinkerton (1996), featuring a darker, more abrasive sound, was a commercial failure and initially received mixed reviews, but went on to achieve cult status and critical acclaim years later. Both The Blue Album and Pinkerton are now frequently cited among the best albums of the 1990s. Following Pinkerton, bassist Matt Sharp left the band, and Weezer went on hiatus.

Weezer's fifth album, Make Believe, was released in May 2005; despite mixed reviews, its single, "Beverly Hills", became Weezer's first single to top the US Modern Rock Tracks chart and the first to reach the top ten on the Billboard Hot 100. In June 2008, Weezer's third self-titled album, also known as The Red Album, featuring "TR-808s, synths, Southern rap, and baroque counterpoint," was released to mixed reviews. Its lead single, "Pork and Beans", became the band's third song to top the Modern Rock Tracks chart, backed by a successful YouTube music video.

Weezer's seventh album, Raditude (2009), and eighth album, Hurley (2010), featuring more "modern pop production" and songs co-written with other artists, achieved further mixed reviews and moderate sales. The band's ninth and tenth albums, Everything Will Be Alright in the End (2014) and the self-titled album also known as The White Album (2016), returned to a guitar-driven rock style and achieved more positive reviews. Their eleventh album, Pacific Daydream (2017), returned once again to a more mainstream pop sound. In 2018, they released two additional self-titled albums: the surprise Teal Album (2019), comprised of pop covers, and the Black Album (2019), which involved a darker sound of pop rock and electropop.

Album Review: Weezer Invites Everyone to Karaoke on The Teal Album B

Album Review: Weezer – Everything Will Be Alright In The End A-

Rock and roll as we knew it may be over, but the genre is far from dead.

by Christopher Thiessen and CoS Staff

The set also boasted covers from this year’s The Teal Album along with old Weezer classics.

The Weezer frontman delivers a nonsense pop track for the Dr. Seuss adaptation.

Yangapalooza goes down Friday in Idaho.

10 Touring Artists Who Shaped the Decade in Music

See some of the most impactful artists of the past decade out on tour now.

Rock am Ring and Rock im Park 2020 lineups: System of a Down, Green Day, Volbeat, Deftones, Korn, and more

Germany’s twin festivals will take place June 5th-7th in the cities of Nürburgring and Nürnberg.

Weezer debut new song “The End of the Game” on Kimmel: Watch

Because what else would you call such a powerhouse lineup?

by Ben Kaye and Alex Young
Previous Next
Popular