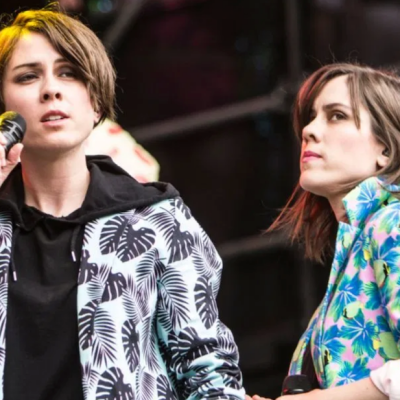 Twin sisters Tegan Rain Quin and Sara Keirsten Quin (born September 19, 1980), the power-pop duo Tegan and Sara from Calgary, Alberta, began playing music at the age of 15, recording their first two demos, Who's in Your Band? and Play Day, in their high school’s recording studio under the name “Plunk”. After winning “Garage Warz”, the pair recorded their first professional demo, Yellow tape, with their won studio time and eventually released their debut album, Under Feet Like Ours, under the name “Sara and Tegan” in 1999. Later, the duo changed their name to Tegan and Sara as many believed they were solo act Sara Antegan. They soon reprinted their first album under the new moniker.

The pair released their second studio album, This Business of Art, under Neil Young’s Vapor Records, followed by If It Was You and So Jealous (released through Sanctuary and Vapor), with minimal commercial success. However, a cover of “Walking with a Ghost” was released by The White Stripes on their Walking with a Ghost EP. With co-production of Chris Walla from Death Cab for Cutie, the duo’s 2007 album, The Con, featured catchy pop hooks and distinct synth-line features from Matt Sharp of The Rentals and previously Weezer. Yet, it wasn’t until the release of the 2009 album, Sainthood, that Tegan and Sara made substantial gain on the Billboard chart. Within the first week, the album rose to No. 21, selling over 24,000 copies. Like Sainthood, Heartthrob (2012), featuring the single “Closer”, debuted on the Billboard top 200, this time at No. 3 -- the band’s highest-charting record to date. The album, compact and full of stadium-pop songs, details the duo’s difficulties of navigating adulthood. Following the success of Heartthrob, Tegan and Sara released Love You to Death in 2016, with a cover album, The Con X, coming a year later featuring Bleachers, Cyndi Lauper, and Hayley Williams of Paramore, among others.

In addition to an expansive catalog of energetic indie-pop, the sisters released a live CD/DVD package, Get Along, comprised of three films -- “States", ''India", and ''For the Most Part” -- earning them a Grammy nomination for “Best Long Form Music Video.” The duo, both openly gay, are also prominent LGBTQ+ advocates, earning them a GLAAD Media Award for Outstanding Music Artist. In addition, the sisters founded the Tegan and Sara Foundation to fight for “economic justice, health and representation for LGBTQ girls and women,” their proceeds from the Con X: Covers and its subsequent tour going to the organization.

Most recently, the pair released a memoir titled High School in tandem with their ninth studio album, Hey, I’m Just Like You, released September 27, 2019, after finding 12 unreleased cassettes, originally recorded when they were teenagers.

Album Review: Tegan and Sara Move Forward by Looking Back on Hey, I’m Just Like You B+

Album Review: Tegan and Sara – Love You to Death B

Album Review: Tegan & Sara – Get Along B

In support of their forthcoming new album and memoir.

The album’s release coincides with the publication of the duo’s memoir.

Plus, the sisterly pop duo will head into the studio next year to record their new album.

It’s been awhile since we last heard from the songwriter, at least under his own name.

Song of the Week: John Carpenter Smashes Pumpkins with “The Shape Returns”

Matthew Dear reconnects with Tegan and Sara for “Horses”: Stream

We cherry-picked 10 pop records destined to please those who consider “pop” a dirty word.

by Ryan Bray and Collin Brennan

The long-awaited follow-up to 2012’s Beams arrives in October.

From Bleachers to Lorde, St. Vincent to Taylor Swift, he’s no stranger to its power.

The Paramore singer covered the track for the twins’ Con X benefit album.

Only her second new recording of 2017.

by Michelle Geslani
Previous Next
Popular