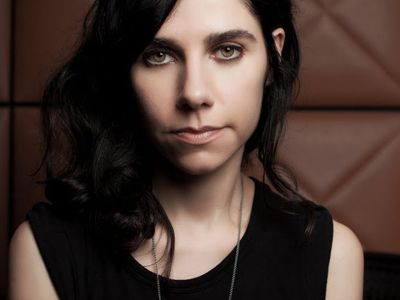 Polly Jean Harvey, MBE (born 9 October 1969), known as PJ Harvey, is an English musician, singer-songwriter, writer, poet, and composer. Primarily known as a vocalist and guitarist, she is also proficient with a wide range of instruments.

Harvey began her career in 1988 when she joined local band Automatic Dlamini as a vocalist, guitarist, and saxophone player. The band's frontman, John Parish, would become her long-term collaborator. In 1991, she formed an eponymous trio and subsequently began her professional career. The trio released two studio albums, Dry (1992) and Rid of Me (1993) before disbanding, after which Harvey continued as a solo artist. Since 1995, she has released a further nine studio albums with collaborations from various musicians including John Parish, former bandmate Rob Ellis, Mick Harvey, and Eric Drew Feldman and has also worked extensively with record producer Flood.

Album Review: PJ Harvey and John Parish – A Woman A Man Walked By A-

PJ Harvey releases score to All About Eve: Stream

The musical accompaniment to Ivo Van Hove’s new stage adaptation of All About Eve.

One track features Lily James, and the other is an instrumental score.

From A Tribe Called Quest to X, the range of talent being shut out is astonishing.

PJ Harvey to score new theatrical production of All About Eve

Directed by Ivo Van Hove, it’s set to open in London next year

Her contribution to the forthcoming British thriller Dark River.

The film centers around family conflict at a Yorkshire farm.

Dave Grohl had big plans for Foo Fighters’ new album, but PJ Harvey made him change them

Plus, the band will open a pop-up pub in London to celebrate the release of Concrete and Gold.

Sometimes an artist finds their true voice when they’ve shut the door on others.

by CoS Staff
22 comments

Follow us as we snap pics of LCD Soundsystem, Weezer, Cage the Elephant, PJ Harvey, and more.