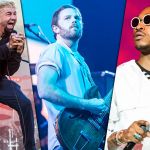 The National, Megadeth, Daughtry, and more!

The following tickets are on sale beginning August 21, 2009…

To quote the first single off Daughtry‘s newest album, Leave This Town, it’s no surprise the North Carolina outfit has mapped out an extensive U.S. tour for this fall. In support of their recently released sophomore effort, former …

Unlike classy talent shows of yore such as Star Search, the nation’s unassuming public follows “meme-in-the-making” auditions, packed with Hung-wannabes and other internet fodder, only to later see our champions berated by a smug Englishman and two has-been pop stars…and this is considered funny. While the mindset of America is easily swayed by lesser humor than even Seth Rogen can muster, the same audience of voters hailed one act as significantly different from the others, and his name is Daughtry.