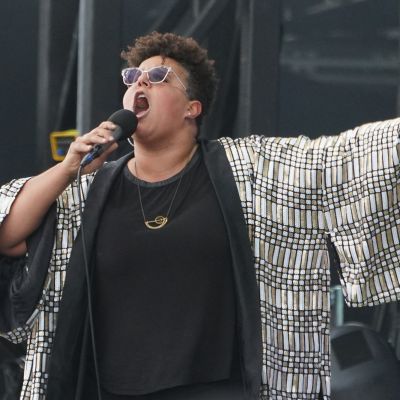 Best known as lead vocalist of rock band Alabama Shakes, Brittany Howard (born October 2, 1988) began playing guitar at the age of thirteen. Her childhood was fraught with a string of unfortunate accidents, including her house burning down from a lighting strike, the death of her older sister, Jaime, due to retinoblastoma in 1998 (Howard also suffered partial blindness from the same disease), and her father's abrupt desertion of her family shortly after. However, with her background in poetry and with her sister’s teachings on piano, Howard began writing music with Alabama Shakes bassist Zac Cockrell, who she met at East Limestone High School. The duo began playing covers at local dive bars with drummer Steve Johnson and eventually released their debut album, Boys & Girls (2012), as Alabama Shakes under ATO records. Howard’s gritty vocals mirroring those of Janis Joplin on “Hold On” and “I Found You” helped the trio snag three Grammy nominations.

Following the success of Boys and Girls, the group spent three years perfecting their sophomore album, Sound & Color, which placed at No. 1 on the Billboard 200 after its April 2015 release. With aid from Bon Iver collaborator Rob Moose, the album concocted a mixture of funk, blues, and psychedelia with songs such as “Don’t Wanna Fight” and “Gimmie All Your Love” eventually landing the group three Grammy awards, including Best Alternative Music Album.

Howard is also the lead singer of the rock band Thunderbitch and supergroup Bermuda Triangle with Becca Mancari and Jesse Lafer (whom she is married to). In 2017, the trio performed a five-show tour in southern states North Carolina, Alabama, Georgia, and Tennessee.

After a spout of writer's block in 2018, Howard isolated herself from her fellow Alabama Shakes members to write her debut, solo, synth-rock album, Jaime, named after her late sister. The album was released on September 20, 2019 followed by a tour of both North America and Europe.

Album Review: Brittany Howard Leads a Spiritual and Sonic Revival on Jaime A-

These are the songs that kept us feeling sane and human in an exhausting and chaotic year.

The album is a far, confident cry from dead if 2019 tells us anything.

In support of her Grammy-nominated solo debut, Jamie.

by Ben Kaye and Wren Graves

This week’s episode of the BBC program is chock full of talent.

Including the Alabama Shakes singer’s intimate songs on childhood, “Georgia” and “Goat Head”.

The Alabama Shakes singer turns in a graceful, powerful rendition of “Stay High”.

A resplendent rendition in support of her solo debut, Jaime.

by Lake Schatz
Previous Next
Popular