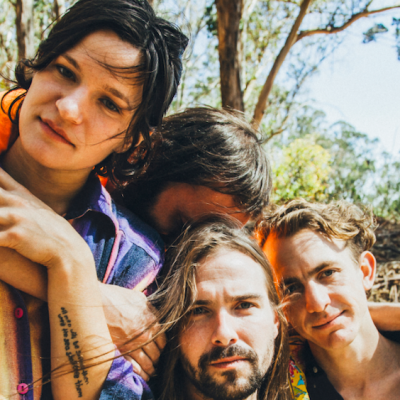 Big Thief, comprised of Adrianne Lenker (guitar, vocals), Buck Meek (guitar, backing vocals), Max Oleartchik (bass) and James Krivchenia (drums), are an indie rock band from Brooklyn, New York. Each member at one point attended Berklee School of Music in Boston, Massachusetts. Although classified as alternative rock, the band balances both lo-fi, acoustic folk tropes and traditional rock hooks to tell interpersonal tales of childhood and tremulous love, as seen on their 2016 debut studio album, Masterpiece. Just seven months after the release of Masterpiece, the band’s sophomore album, Capacity (2017), hit the shelves, earning high praise for its rich projection of haunting memories yet abstract illumination of catharsis baked in jaunty guitar and crashing drums. In August of 2019, the quartet wrapped up recording their third album, U.F.O.F, or what they call “the Celestial Twin,” in a studio in the woods of Washington. On this album, Big Thief shied away from themes of childhood and family and steered into a more dreamlike, terrestrial cut that seems to expand into unknowns and the fantastical. Within the first week of its release, U.F.O.F reached the top of the Billboard charts, placing at No. 1 for Alternative New Artist Albums.

On August 13th, the band released “Not”, a song they’ve played live for years. Following the track's release, the group released the “Earth Twin” album, Two Hands, on October 11, 2019, making it the band's second critically acclaimed record in a single calendar year.

Calming track is a reminder to “value the connection with our loved ones.”

Outside Lands 2020 Canceled Due to Coronavirus, 2021 Lineup Announced

Next summer’s installment boasts Tame Impala, Lizzo, The Strokes, The 1975, and more.

Big Thief Are Smitten on New Single “Love in Mine”: Stream

A leftover from the recording sessions that produced Two Hands.

The former Red Hot Chili Peppers member said he got “hooked” onto Big Thief after watching their recent Colbert performance.

Culled from their album sessions for both U.F.O.F. and Two Hands.

These are the songs that kept us feeling sane and human in an exhausting and chaotic year.

The album is a far, confident cry from dead if 2019 tells us anything.

Fans in Toronto were treated to the solo cover.

Featuring renditions of “Two Hands”, “Not”, and “Forgotten Eyes”.