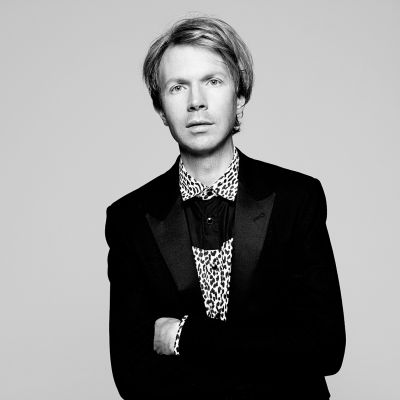 Beck Hansen (born Bek David Campbell; July 8, 1970), known by the stage name Beck, is an American singer, songwriter, producer and multi-instrumentalist. He rose to fame in the early 1990s with his lo-fi, sonically experimental style, and he became well known for creating musical collages of a wide range of styles. His later recordings encompass folk, funk, soul, hip hop, alternative rock, country and psychedelia. He has released 12 studio albums, as well as several non-album singles and a book of sheet music.

Born in Los Angeles in 1970, Beck discovered hip hop and folk music in his teens and began to perform locally at coffeehouses and clubs. He moved to New York City in 1989 and became involved in the city's small but intense anti-folk movement. After returning to his hometown in the early 1990s, he cut his breakthrough single "Loser", which became a worldwide hit in 1994. His 1996 album Odelay produced hit singles, topped critic polls and won several awards. He released the stripped-down Mutations in 1998, and the funk-infused Midnite Vultures in 1999. The downcast, acoustic Sea Change (2002) showcased a more serious Beck, and 2005's Guero returned to sample-based production. The Information (2006) was inspired by electro-funk and hip hop, and Modern Guilt (2008), likewise, by 1960s music. In February 2014, Beck released the album Morning Phase. It won Album of the Year at the 57th Grammy Awards on February 8, 2015.

With a pop art collage of musical styles, oblique and ironic lyrics, and postmodern arrangements incorporating samples, drum machines, live instrumentation and sound effects, Beck has been hailed by critics and the public throughout his musical career as being among the most creative and idiosyncratic musicians of 1990s and 2000s alternative rock. Two of Beck's most popular and acclaimed recordings are Odelay and Sea Change, both of which were ranked on Rolling Stone's list of the 500 greatest albums of all time. The four-time platinum artist has collaborated with several artists and has made several contributions to soundtracks. Beck is married to actress Marissa Ribisi, and is a Scientologist.

Album Review: Cage the Elephant Stay in Their Comfort Zone on Social Cues B-

Album of the Week: Jenny Lewis’ On the Line Navigates Life Changes with Verve and Wit B

Josh Homme, Beck, and Cat Power also contribute to the soundtrack to Echo in the Canyon.

A digital landscape created with analog technology for the Social Cues collaboration.

It’s time to map out your Summer 2019 festival itinerary.

Album Review: Cage the Elephant Stay in Their Comfort Zone on Social Cues

An album of radio-friendly songs that plays it safe when risks might’ve yielded something more.

20 Moments That Made Coachella What It Is Today

Tracing the history of how Coachella came to be America’s preeminent music festival.

Song of the Week: Rosalía Reaches Even Higher Ground on “Con Altura”

Filmed during Lewis’ star-studded On the Line listening party and variety show.

Cage the Elephant and Beck will embark on their 30-date co-headlined “Night Running Tour” this July.

Album of the Week: Jenny Lewis’ On the Line Navigates Life Changes with Verve and Wit

Cage the Elephant, Beck, and Spoon team up for North American tour

by Alex Young
3 comments
Next
Popular