Separating the Art from the Artist Isn’t Always Possible 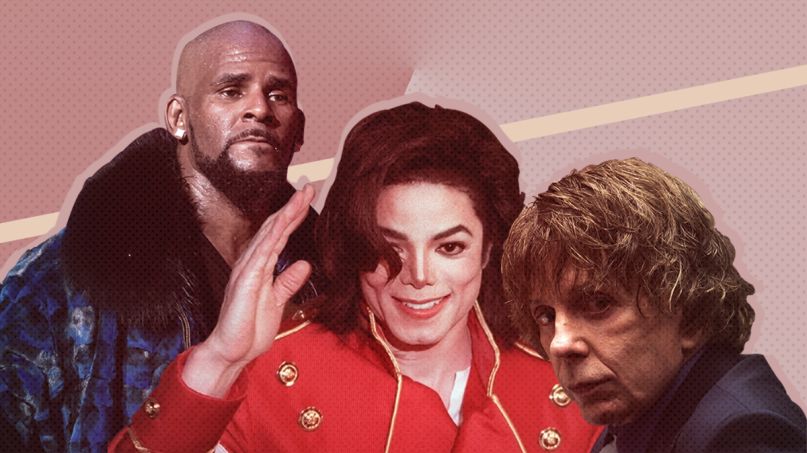 The human condition. It’s a hard thing to comprehend. People are capable of creating profound beauty. Conversely, they can perpetrate acts of depravity that force the mind to recoil. Every one of us has had a transcendent moment of grace, and we’ve all done things we’re ashamed of. That’s life in all its messy confusion. That holds true for me and you, and it’s painfully true when we consider some of the people who’ve created generation-defining art.

It’s safe to say nearly all our favorite artists have skeletons in their closet, with morally dubious behaviors and actions that we would probably feel bad about if we or someone close to us committed them. Consider that even the mythos of, say, Led Zeppelin or The Rolling Stones is built in part on a hedonism and anarchic lifestyle that most of us would never want as a part of our daily lives.

But what happens when an artist’s life story goes beyond idealized mayhem? What do you do, and how do you respond when you realize that a person who provided the soundtrack to your life is a disgraced monster?

Honestly, I don’t know, but the news of Phil Spector’s death has compelled me to really think about how we tackle these difficult questions.

Even before he was convicted of the murder of Lana Clarkson, Phil Spector’s legacy was diminished. Decades of drug-fueled violence and insanity, a memoir from ex-wife Ronnie Spector outlining years of absolutely ghastly abuse, and two-plus decades of inactivity as a producer rendered him culturally irrelevant at best and, at worst, one of the biggest ghouls in the history of popular music.

And that reputation is deserved! What’s interesting is that while Spector has been justifiably reviled, it hasn’t really impacted the treatment of his body of work. The guy produced George Harrison’s All Things Must Pass and John Lennon’s Imagine, wrote and produced “He’s a Rebel”, “Be My Baby”, and “River Deep-Mountain High”, unimpeachably perfect songs. His Wall of Sound production necessitated the creation of famed session musicians the Wrecking Crew, served as the impetus for Brian Wilson’s arrangements on Pet Sounds, and created the sound Springsteen sought to replicate on Born to Run.

But because he was a producer, not the main attraction, it’s easier for listeners to compartmentalize Phil Spector and enjoy the work he helped create. “Imagine” is remembered as a triumph for Lennon, and All Things Must Pass is Harrison’s opus. Those singles he wrote for The Ronettes and The Crystals serve as enduring tributes to the talents of Ronnie Spector and Darlene Love, who are true rock and roll survivors and succeeded despite his abuse.

Ultimately, Phil Spector was a role player — an important, industry-changing one — but a role player nonetheless and easy enough to move past because he was almost always in the background or on the sidelines for his triumphs. Sometimes, though, it’s not that simple and you’re forced to grapple with a figure and legacy too large to ignore.

There’s a reason Michael Jackson was deemed the King of Pop. He’s the most successful recording artist of all time and the archetype of the modern pop star. He was also, most likely, a sexual predator and child abuser.

The public opinion on Jackson has been a metaphorical see-saw the past 25-30 years. In the early 1990s, he was an eccentric, but by the mid-’90s, he had settled a lawsuit for child sexual abuse, and those eccentricities became something sinister. He was criminally charged with seven counts of child molestation in 2003 and was acquitted. But the damage to his reputation seemed to be irreparable.

Then Jackson died on June 25th, 2009, weeks before the scheduled start of a series of comeback shows. In death, his personal and legal troubles were set aside, and he received tributes for his legacy as an incredibly gifted singer, composer, and performer who struggled with tremendous personal difficulties. And for most of the 2010s, that’s been the popular perception of Jackson and his back catalog. It became, for lack of a better word, OK to like Michael Jackson again.

However, the 2019 documentary Leaving Neverland threw a wrench into the narrative of his reassertion into mainstream acceptance. The allegations of child molestation were back, with detailed recollections of abuse. Once again, fans and audiences were forced to confront the reality that the larger-than-life figure behind “Thriller”, “Billie Jean”, “Bad”, and dozens of other songs that left an indelible mark on our lives was possibly (probably) a monster.

Now, here’s where it gets weird. “Weird Al” Yankovic stopped playing his Jackson parodies live. Jackson’s cameo on The Simpsons has been scrubbed from existence. Films and exhibits honoring his career have been scratched. But despite that, sales and streams of his music surged in the aftermath of the documentary’s premiere, and both Jackson’s estate and die-hard fans have claimed these accusations are false cash-grabs, low blows lobbed now that he’s not alive to fight back.

And maybe that’s true. He was tried and acquitted of molestation charges, after all. In 2020, Forbes announced he’s been the highest-earning dead celebrity nearly every year since his demise. But, speaking for myself, the trickle of accusations has had an impact that makes it hard to feel particularly comfortable with his art and image. Heading into a Target or Walmart (or any big box retail) and seeing Thriller on vinyl or a stack of shirts with his name and visage emblazoned on it feels more than a little bit gross.

The fact that Michael Jackson’s career has continued to hum along is atypical, a combination of the fact that it’s hard to eliminate the stratospheric highs of his back catalog from our collective memory and his untimely death helping to turn him into a tragic figure. Usually, even if it takes years (as we’ve seen with Phil Spector, Bill Cosby, and Harvey Weinstein), a serial predator faces the piper. Look no further than the self-proclaimed Pied Piper of R&B for proof of that.

The R. Kelly saga is one of the most bizarre and twisted stories in recent memory. I mean, where do you even begin? You could start with his marriage to a then-underage Aaliyah in 1994. Or the handful of lawsuits he settled between 1996 and 2002. For most people, Kelly’s deviancy entered the public consciousness in 2002, when he was arrested and charged with 21 counts of making child pornography.

Somehow, in the aftermath of his arrest and subsequent acquittal, Kelly’s stardom only grew. He recorded two successful records with Jay-Z and released nine chart-topping albums (and one abysmal Christmas LP). Kelly’s surrealistic “Trapped in the Closet” music video series became a pop culture phenomenon, receiving airplay on music channels and even film networks like IFC.

Kelly and his enablers managed to spin his arrest into a positive, crafting an image of Robert as a lascivious, deeply sexual man and not someone who’s preyed on vulnerable, young girls for decades. For most of his career, it worked. Until it didn’t.

In 2017, Buzzfeed published a thorough expose of a Kelly-run sex cult. Its publication led to a host of victims bringing their stories to light. Concert promoters and his record label pulled the plug on him, and his music was temporarily off streaming services. The coup de grace came in 2019 after the shocking Lifetime documentary Surviving R. Kelly. As a result, state and federal officials finally took action, and Kelly has spent most of the last two years in prison, awaiting trial for sexual assault, abuse of a minor, making indecent images of minors, racketeering, and obstruction of justice.

Now, Kelly isn’t a pariah or controversial figure anymore; he’s a cultural non-entity. If his name somehow comes up now, it’s either to reference his pending trial or to highlight the need to listen to and believe victims, as his were silenced for far too long.

Murder. Sexual assault. Pedophilia. That’s all pretty heavy shit, the type of things that necessitate a judgment and a reckoning. However, sometimes you don’t even have to commit a major felony to turn yourself into a villainous or contentious figure. All you have to do is be yourself.

Few artists have pursued self-martyrdom like Morrissey. Being ostracized and misunderstood is part of his art and his public image. In his nearly 40-year career, Moz has cultivated an image as an outspoken voice for the lonely and downtrodden (and the melodramatic). That lonely-heart posturing has helped to offset comments and songs like “Benghali in Platforms” and “National Front Disco” that tacitly support racial exclusion. For years, there was always an equivocation, a claim that he was being ironic or provocative, always some sort of mental gymnastics to defend Moz.

Morrissey being Morrissey, however, he had to make himself indefensible. In 2018, Morrissey threw his support behind the radical For Britain Party, which ran on an anti-Islamic platform and in 2019, he uttered the gem, “Everyone ultimately prefers their own race — does this make everyone racist?”

This rhetorical supposition was not nearly as brilliant as Morrissey likely thought. And in throwing his weight behind fringe racial and ethnic politics, he committed a major offense among his fans: instead of being a defender of the oppressed, he became the voice of an oppressor. His transgressions may not be on the same level as others discussed in this article, but they are vile enough to make many Moz fans have to think twice about their fandom.

We fall in love with artists. Their work speaks to us, helps provide emotional support during good times and bad. It’s hard to find out that in real life that creator fails to meet the high regard we hold them in. Trying to separate the art from the context of the artist’s life is even more difficult, and we’ve yet to find a satisfying way to address this problem as a society.

Phil Spector’s death was just the latest reminder of this problem, though, it also makes clear that there is nuance to all of this and what society deems an acceptable response. As we listen on a daily basis to the many songs of love and hope and idealism whose production Spector’s fingerprints are all over, most of us don’t think about the monster at the soundboard in those studios. Maybe, at least in this case, that’s for the best. Phil Spector is dead, but those songs survive him and continue to impact lives for the better.