Nikki Sixx and Bret Michaels Appear on Dr. Phil to Address Woman Who Was Convinced They Had Befriended Her 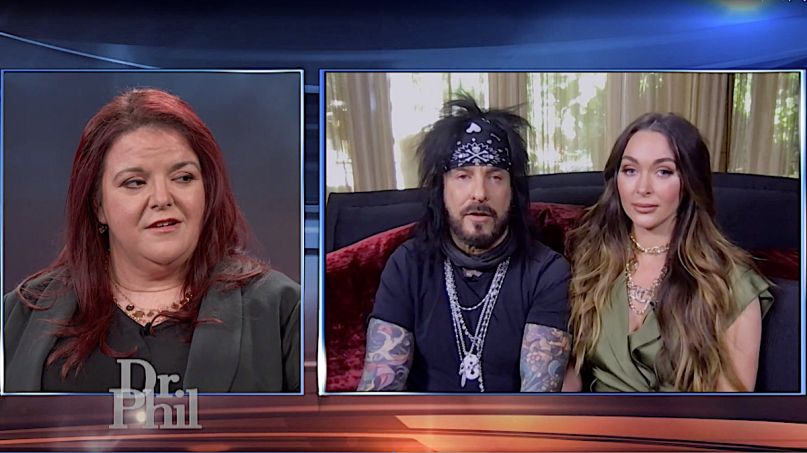 Tina with Nikki and Courtney Sixx (via Dr. Phil)

A woman who was convinced she was engaged to Poison singer Bret Michaels and in a text-message friendship with Mötley Crüe bassist Nikki Sixx appeared Wednesday (January 27th) on Dr. Phil. In order to help persuade her that she was being catfished, both Michaels and Sixx checked in with the show to let her know that she was being duped by an imposter.

Tina, the woman profiled on the show, believed that she had been texting daily with Sixx and that Michaels had proposed to her. She even said that she had sent money to “Nikki Sixx”, at his request. Her friend Vivian knew that Tina was being scammed, but she apparently needed Dr. Phil to convince her. Throughout the episode, Dr. Phil pointed out that various texts and images of driver’s licenses that Tina thought she received from the two rock stars were fake, but he also got the musicians themselves to intervene.

At one point in the conversation, Dr. Phil brought in Sixx and his wife Courtney via video, so they can let Tina know directly that the person she thought was the rock legend was indeed not him.

“We wanted to come on together and let you know that whoever you’re talking to is not me, and I’m sorry that this is happening to you,” said Sixx. “Watching the show, and how Dr. Phil is trying to break it all down for you, it’s heartbreaking for us. It’s not funny, it’s cruel. And you seem like a very nice person.” Nikki and Courtney then invited Tina to a meet & greet at a Mötley Crüe show, once the band is able to tour again.

Michaels sent in a pre-recorded video to address people being scammed during the pandemic. “These imposters who are going after innocent people like Tina, who is on your show right now, and other people, they will not stop during this pandemic. People are vulnerable. I feel like people right now are isolated … and that is the perfect time for these scumbags, scammers, con artists, and imposters to come after innocent people.”

After hearing from both Sixx and Michaels, Tina was finally convinced, saying, “I was scammed and I admit it.”

The episode has been broken up into five parts on YouTube, as seen below. However, the clips featuring the real Nikki Sixx and Bret Michaels can only be found on the Dr. Phil website, with the Sixx video here and the Michaels video here.