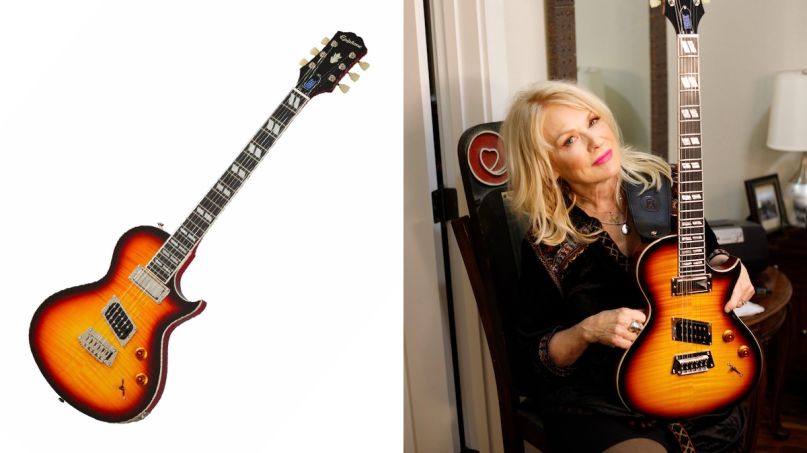 Heart co-founder Nancy Wilson has teamed up with Epiphone for the new “Fanatic” electric guitar. The announcement of the new instrument comes ahead of Wilson’s forthcoming solo album, due out in April.

The Fanatic is Wilson’s first guitar designed for Epiphone and her second collaboration with Gibson Brands. The guitar features the classic Nighthawk shape with a mahogany body and figured maple veneer top.

The body comes equipped with ProBucker humbucker pickups, a 5-way pickup selector switch, master volume and tone controls, a rounded C-profile mahogany neck with an ebony fretboard, and “fireburst” gloss finish. The Fanatic also comes in its own hardcase.

“In the midst of the distant eighties, I was approached by Gibson to design a signature model,” Wilson said in an interview introducing the guitar. “I put pencil to paper to first design the body shape and chose a curvy female diminutive silhouette for the cut away. Many years later, the body shape remains exact and the hardware I requested makes the Fanatic a solid citizen amongst the great rock guitar screamers.”

Added Krista Gilley, brand director at Epiphone: “It’s such an honor to work with Nancy, an icon who has been instrumental and influential to generations of players around the world. She has paved the way for female musicians to believe in their passion, talent and in music, and that comes with an obligation for all of us at Epiphone to pay tribute to Nancy.”

Gibson Brands is busy rolling out signature model instruments, with new electric basses and guitars designed by KISS’ Gene Simmons on the way. Slash also has also added new additions to his line of Gibson models.

Watch the full video introduction with Nancy Wilson below. You can pick up the Fanatic at its retail price of $529 via Reverb.