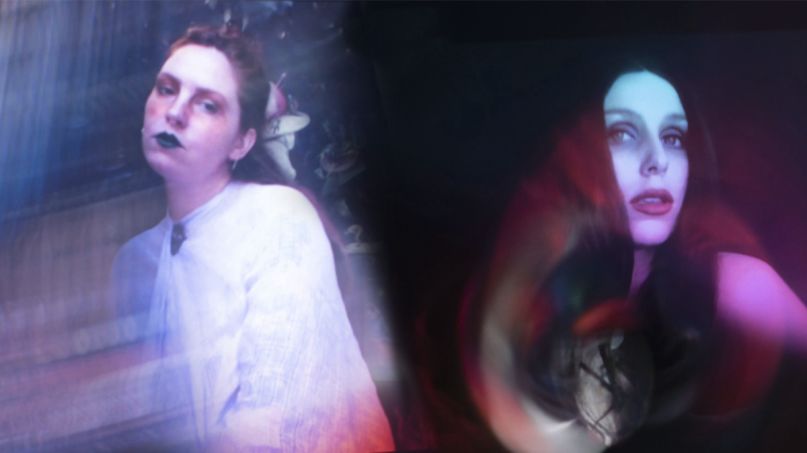 Wolfe originally wrote the piece in the summer of 2019 before shelving it to concentrate on the acoustic album Birth of Violence and her subsequent tour. When lockdowns hit, she revisited her backlog of compositions and revived the darkly beautiful song with the help of Rundle and frequent collaborator Ben Chisholm.

“I wrote ‘Anhedonia’ after I experienced it during summer of 2019, then tucked the song away and moved forward with my acoustic album and subsequent North American tour,” Wolfe revealed in a press statement. “When COVID-19 hit and stay-at-home orders began in 2020, my European tour was canceled and I had to fly home. Restless, I started listening through my archives of unfinished songs and little unused ideas. When I heard ‘Anhedonia’ again, it hit me how strangely relevant the lyrics felt to current times.”

As is her penchant, Wolfe holds the listener’s attention with haunting vocals, poetic lyrics, and cavernous production. Rundle fills out the mix with her distinct guitar playing and backing vocals. The two songwriters were supposed to embark on an Australian tour together before the pandemic hit.

“I’d been wanting to work on a song with Emma for a long time, so I recorded it and sent it her way,” Wolfe said. “She graciously added her gorgeous vocals and lead guitar, and then Ben mixed it, adding his signature sound landscape as a fortress around the song. As I listened back to the final version, I was finally able to set free those emotions which I couldn’t feel back in 2019. I had worries around releasing the song, not wanting to romanticize the condition of anhedonia (the inability to feel pleasure), but I also understood that it could possibly be cathartic for others who are struggling, as it was for me, to sing and dance my way out of a depression.”

For Rundle, the song caused such a strong emotional reaction that it took her a while to finish her overdubs.

“I was moved to tears when she sent me Anhedonia, which made getting through the tracking very emotional and slow on my end,” Rundle said. “I love the way the guitars I tracked morphed in Ben’s mix. The whole song swirls in a poignant eddy of sorrowful sound and still takes a hard swing at my heart hearing it now.”

The collab with Wolfe follows Rundle’s work with Louisiana sludge metallers Thou. The pairing of Rundle and Thou released The Helm of Sorrow EP earlier this month as an addendum to their excellent 2020 album, May Our Chambers Be Full.

Listen to “Anhedonia” and check out the artwork below. You can purchase the digital single via Sargent House.