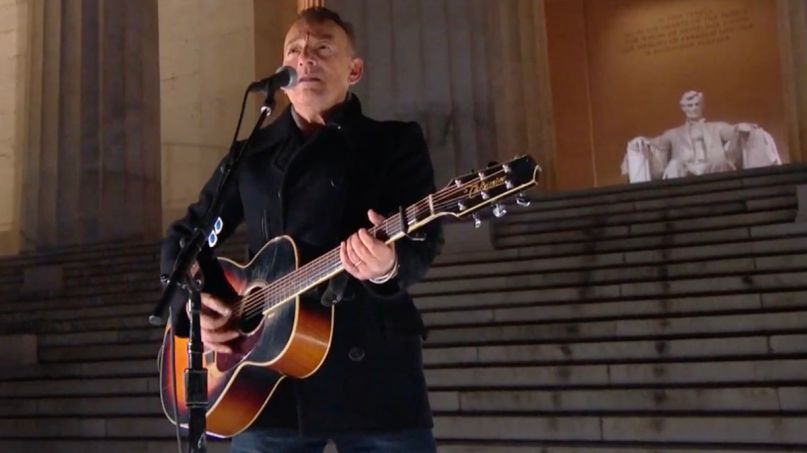 As two men in their seventies with working-class vocabularies and an unmatched love of trains, Joe Biden and Bruce Springsteen were made for each other. At a time when politics has rarely seemed certain, it felt like an act of destiny when The Boss kicked off at the Celebrating America Inauguration Concert on behalf of Amtrak Joe.

The two men are hardly strangers; Springsteen campaigned on behalf of the Obama-Biden ticket in 2012, even writing a new rally song at Obama’s request. While Biden didn’t get an original track, he did receive a Springsteen-narrated campaign ad, which has now been followed by a stirring inauguration performance. Springsteen delivered a solo acoustic rendition of “Land of Hope and Dreams” from the steps of the Lincoln Memorial. Check out the performance below.

The Celebrating America concert was hosted by Tom Hanks and also showcased the talents of Foo Fighters and John Legend. Earlier in the day, Lady Gaga performed the National Anthem at the swearing-in ceremony, which also boasted appearances by Jennifer Lopez and Garth Brooks. And the New Radicals reunited to perform their ’90s hit “You Get What You Give” as part of Biden’s “Parade Across America”.

Last year, with Springsteen’s new album Letter to You, he became first artist with a Billboard top five album in each of the last six decades.