Billie Eilish and Rosalía Announce Collaborative Song “Lo Vas A Olvidar”, Due Out This Week 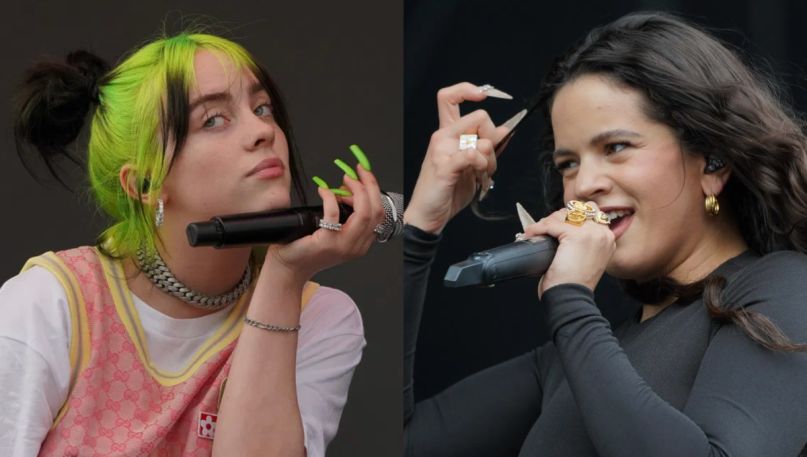 Post-Trump America is looking brighter already: Billie Eilish and Rosalía have announced a new collaborative song titled “Lo Vas A Olvidar”, and it’s due out this Thursday, January 21st.

The track, which translates to “You Will Forget It”, was written and recorded for HBO’s upcoming Euphoria bonus episode “F*ck Anyone Who’s Not a Sea Blob” that focuses on the character Jules. A few seconds of the song can be heard in a new trailer for the special episode, and you can find that below.

“Lo Vas A Olvidar” marks the first joint release from Eilish and Rosalía, and it’s been years-in-the-making. The song dates back to a session held in March 2019. Rosalía gushed about Eilish at the time of recording, saying, “She’s an artist with such a strong drive, who knows exactly who she is and what she wants, who pours her soul out when she sings.”

The flamenco pop artist added, “I’ve been in the studio with a lot of people, but no one has impressed me [the way] she has. She has extreme charisma and extreme passion when she sings.”

In an interview with Apple’s Zane Lowe this past April, Rosalía teased that the track was nearing completion. “During these two last weeks [in quarantine] I have been trying to finish the Billie Eilish collab… I think it’s getting quite closer.”

Last fall, Euphoria scored three Emmys. The biggest of the bunch went to Zendaya, who became the youngest person to ever win the award for Outstanding Lead Actress in a Drama Series.

Eilish closed out 2020 with “Therefore I Am”, one of the best songs of the year, and well as a handful of Grammy nominations. Our former Rookie of the Year just announced a new photo book and also has an Apple TV+ documentary on the way next month.

As for Rosalía, she dropped quite a few singles and collaborations in 2020, including “Dolerme”, “Juro Que”, and the Travis Scott-assisted “TKN”. The 27-year-old Grammy winner also popped up on a remix of The Weeknd’s smash hit “Blinding Lights”.

Billie and @Rosalia – “Lo Vas A Olvidar”
For @EuphoriaHBO
Song and music video out on 1/21/21 at 9am PT pic.twitter.com/7m6kaos1fQ