What the Cluck? Mario Lopez Plays Colonel Sanders in KFC-Lifetime Original Film A Recipe for Seduction

This corporate dystopian cluster-cluck will premiere December 13th on Lifetime 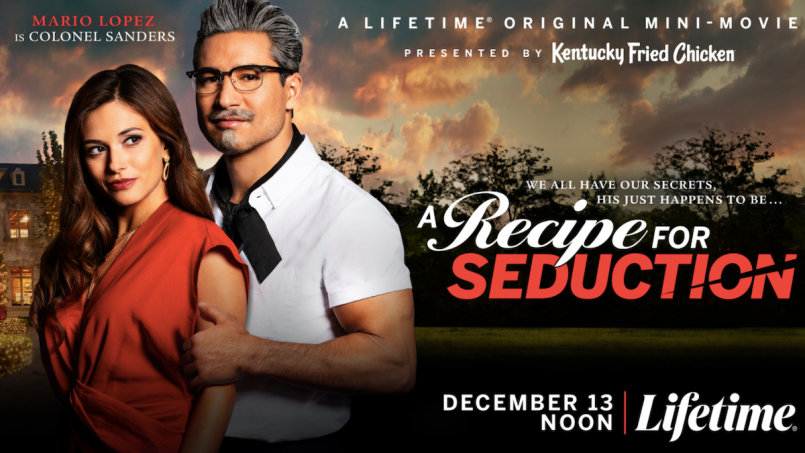 The original Colonel Sanders looked like a mashed potato with glasses, so consider Mario Lopez the spicy option. The Saved by the Bell heartthrob will star as chef Harland Sanders in the new Lifetime original mini-movie A Recipe for Seduction. This corporate dystopian cluster-cluck will air December 13th on Lifetime, and the first trailer is out now.

While KFC and Lifetime may seem like clashing flavors, the fast food retailer has proved that anything can go with anything, so long as your bucket is big enough. Besides, the two companies have a few things in common, especially a reliance on a tried-and-true formula, whether that is a woman in jeopardy with a violent male partner or the 11 original herbs and spices.

Both make appearances in the 15-minute film, judging by the new trailer. Our ingenue is named Jessica, and she admits that she’s “falling for the chef,” who has “a secret recipe that’s going to change the world.” The antagonist appears wearing a sweater tied around his neck, who introduces himself with the words, “You don’t answer my proposal, and now you’re not answering my calls.” Later, he seems to make out with Jessica’s mom. Plus, knives are sharpened, and tension builds with dialogue like, “You’re ruining everything!” and “Your secret is out, chicken man!” Will the bad guys win? Or will Colonel Sanders (drum)stick it to the man? Considering the brevity of the actual movie, you can catch just about every plot point in the trailer below.

If this doesn’t satisfy your hunky cravings, Mario Lopez has returned to the role that made him famous in the new reboot of Saved by the Bell.