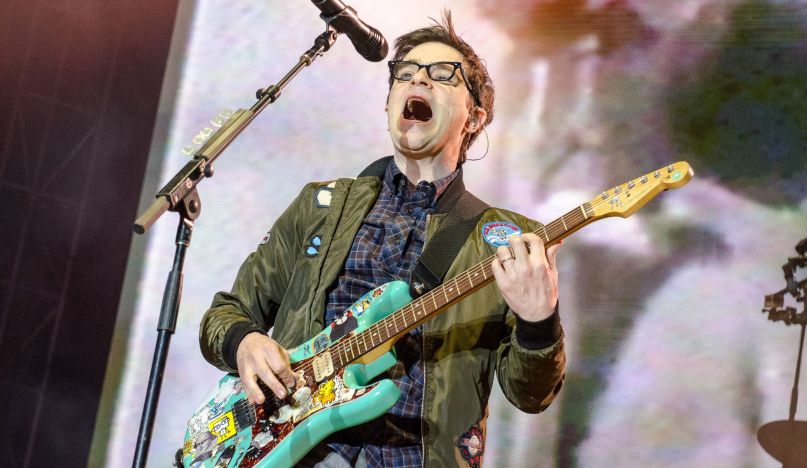 We didn’t get a new Weezer album this year, but frontman Rivers Cuomo has arguably given diehard fans a better gift. The 50-year-old rocker recently created an online marketplace where he’s selling over 2,000 unreleased demos, spanning the pre-Weezer years all the way up to the band’s 2015 era.

Located in the “Market” section of his Mister Rivers’ Neighborhood website, Cuomo has ten different compilations for sale that are organized based on different periods of his creative history. Each demo pack costs just $9, but the track counts range from 26 in the concise “Best of the Demos” comp to a whopping 1,113 (that’s over 38 hours of music!) for “The EWBAITE Years”, which encompasses the 2011-2014 era.

Fans of Weezer’s early work will surely be tantalized by the 72 demos in the coveted “Blue-Pinkerton Years”, as well as the “Before Weezer” comp, which begins in 1976 when Cuomo was only six years old (!) and concludes right before Weezer started in 1992. Other packs are dubbed “The Green Years”, “The Maladroit Years”, and “The White Year”, which correlate with those albums in the Weezer catalog.

As Music Ally points out, the marketplace also comes with a tongue-in-cheek disclaimer section where Rivers warns prospective buyers of the inherently chaotic and messy nature of a life’s work of demo recordings,

Most of the selections feature previews with a short bit of audio commentary from Cuomo, but the only way to figure out the true scope of each pack is to shell out the nine bucks. Cuomo also notes that this marketplace is the final project for a course he’s taking in web programming, so maybe a future Weezer album will be titled something like “Learn to Code”.

Back in September, Weezer squared off with Fall Out Boy (whom they would have been touring with this year) in a game of Celebrity Family Feud. This past spring, they released a song called “Hero” that was dedicated to frontline workers.

For my Web Programming class final project, I made a web market stocked with 2655 previously unreleased demos. https://t.co/wFNb1drPRs