Part of the SMooCH livestream benefit for the Seattle Children's Hospital 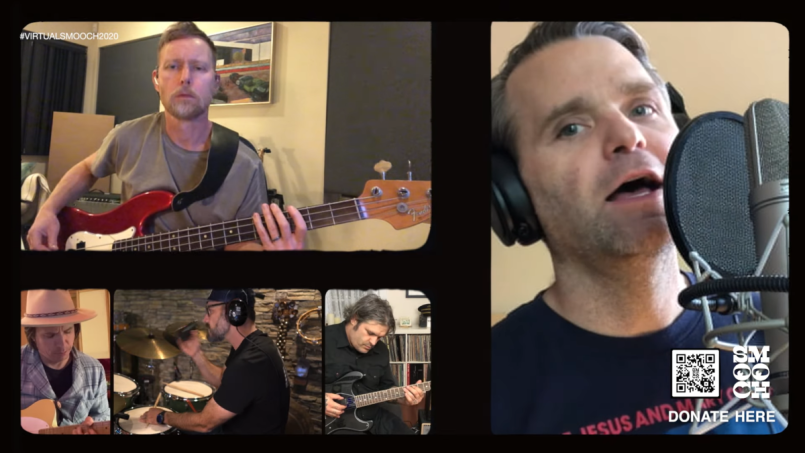 Ben Gibbard and his backing band during the SMooCH livestream performance

At the very least, the ongoing lockdown has resulted in some very odd musical pairings that likely wouldn’t have happened otherwise. The latest of these went down on December 5th, when Death Cab for Cutie’s Ben Gibbard, Guns N’ Roses’ Duff McKagan, Modest Mouse’s Isaac Brock, and Mark Lanegan teamed up to cover the Jimmy Webb country classic, “The Highwayman”.

The collaboration was part of SMooCH 2020, an annual benefit show for the Seattle Children’s Hospital that usually takes place in person, but was converted into livestream form this year for obvious reasons. The Seattle institutions Sub Pop Records and KEXP were two of the event’s biggest sponsors, so it made sense that both elite and slightly left-of-center members of the rock world were featured in the presentation.

For their cover of “Highwayman”, each vocalist took a turn singing a different verse, beginning with Gibbard, then McKagan, Brock, and finally Lanegan. All of those guys have very unique and different sounding singing styles, but each of them shifted their usual deliveries to maintain the rootsy integrity of the song, and it ended up sounding a lot more cohesive than one might think.

Also, if the presence of those four wasn’t enough to cement this temporary supergroup status, the backing band featured Foo Fighters’ Nate Mendel, members of Death Cab, The Afghan Wigs, The Walking Papers, and guitarist Ian Moore. Watch the absolutely stacked performance below, which begins at the video’s 53:41 mark.