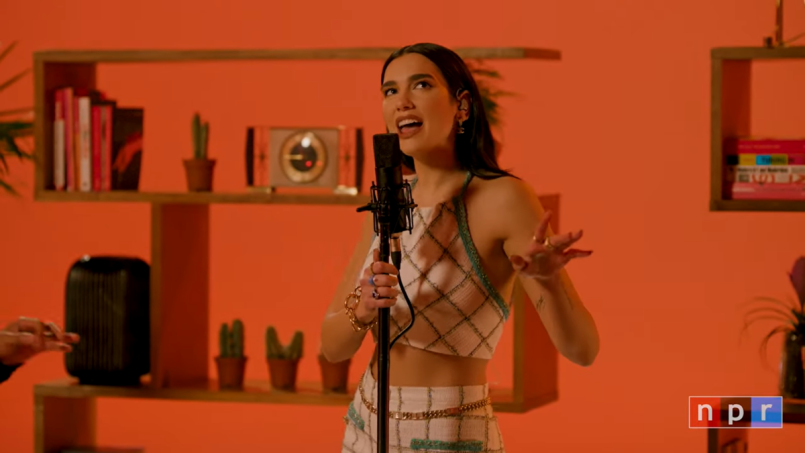 Dua Lipa has had a truly breakout year, and she’s riding the wave all the way through to the end: today, the pop star officially made her NPR Tiny Desk debut. Lipa performed a “Home” edition of the long-running concert series that featured stripped-back versions of songs from her Grammy-nominated 2020 album Future Nostalgia .

Although these renditions of “Levitating”, “Pretty Please”, “Love Again”, and “Don’t Start Now” are more minimal than the glossy forms they took on Future Nostalgia, the performance was by no means a solo set. Lipa was joined by the six-person backing band that she would’ve been touring the world with if 2020 didn’t turn out the way it did, and they all added a great deal of warmth and color that complements Lipa’s absolutely spot-on singing.

In between songs, the 25-year-old Londoner expressed how excited she was to be back with the band for the first time in months. And although the mood had the obligatory twinge of disappointment that accompanies all livestreams in the quarantine age, Lipa kept things moving and seemed genuinely excited to be there.

While introducing “Love Again”, which featured some amazing four-part harmonies from her backup singers, Lipa spoke about the song’s theme of resilience. “It’s about manifesting good things into your life, when things aren’t quite going your way,” she said. Watch the full 15-minute performance below.

Outside of this performance, Lipa released a new standalone single called “Fever” in October, in addition to guesting on Miley Cyrus’ new full-length Plastic Hearts. Find out where Future Nostalgia ranked on our Best Albums of 2020 list, and which one of her songs made our Best Songs of 2020 list as well.