Warner Bros. to Release Entire 2021 Movie Slate on HBO Max and in Theaters on Same Day

Dune, The Matrix 4, The Suicide Squad, Space Jam, and other major titles will stream for 31 days upon their initial release 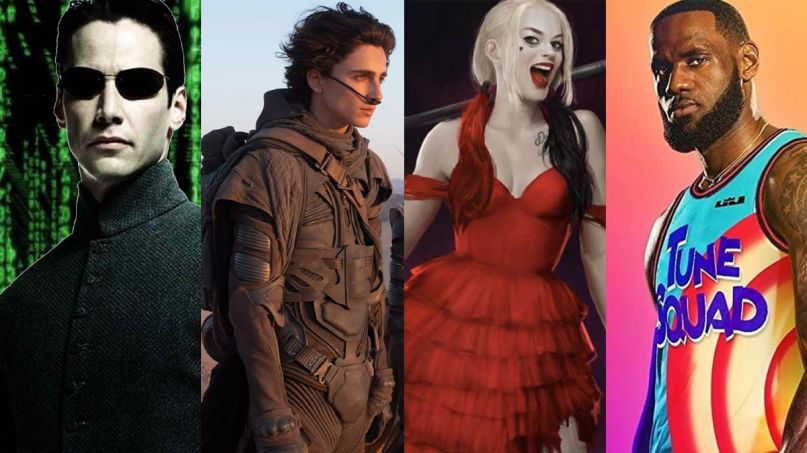 Warner Bros. will send its entire 2021 slate of movies — including The Matrix 4, Dune, The Suicide Squad, Space Jam: A New Legacy, and Sopranos prequel The Many Saints of Newark — to HBO Max on the same day of each film’s respective theatrical release.

The unprecedented move to bypass exclusive theatrical distribution windows was done in response to the pandemic, which has shuttered most movie theaters across the US. Though a vaccine could go into circulation by the end of the year, health experts believe it won’t be until Q3 of 2021 that a majority of the country is vaccinated. Warner Bros. foreshadowed the move last week when they announced that Wonder Woman 1984 would simultaneously premiere on HBO Max and in theaters on Christmas Day.

Other impacted 2021 titles include Godzilla vs. Kong, Tom & Jerry, Mortal Kombat, In the Heights, The Conjuring: The Devil Made Me Do It, King Richard, and Reminiscence. The decision comes after the studio released Christopher Nolan’s highly anticipated Tenet into theaters over the summer but saw painfully low returns. That film is set for a December 15th home release, though it’s unknown if that currently includes an appearance on HBO Max.

“We’re living in unprecedented times which call for creative solutions, including this new initiative for the Warner Bros. Pictures Group,” said Ann Sarnoff, chair and CEO, WarnerMedia Studios and Networks Group in a statement. “No one wants films back on the big screen more than we do. We know new content is the lifeblood of theatrical exhibition, but we have to balance this with the reality that most theaters in the U.S. will likely operate at reduced capacity throughout 2021.”

“With this unique one-year plan, we can support our partners in exhibition with a steady pipeline of world-class films, while also giving moviegoers who may not have access to theaters or aren’t quite ready to go back to the movies the chance to see our amazing 2021 films. We see it as a win-win for film lovers and exhibitors, and we’re extremely grateful to our filmmaking partners for working with us on this innovative response to these circumstances.”

As sources told The Hollywood Reporter, the plan to shatter the box office window was “kept close to the vest and not shared with many exhibitors.” That means theater owners are likely as shocked by this news as film fans, and the studio may hope to pacify them by negotiating better ticket sale splits. Insiders say such exhibitor-favoring revenue deals are already in place for Wonder Woman 1984, with Variety putting the number at 60%.

What’s more, WB reportedly did not inform partners such as Legendary, which co-produced Godzilla vs. Kong, that a year-long move to HBO Max was coming.