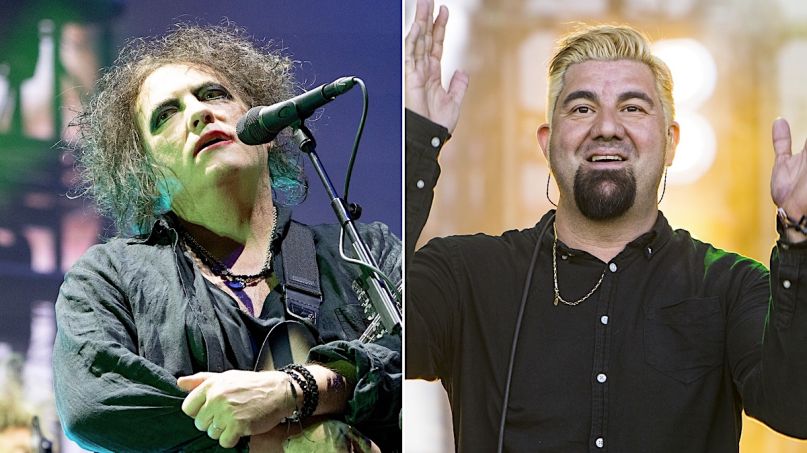 Deftones have unveiled a new remix from their upcoming Black Stallion album, which is being packaged as part of a 20th anniversary deluxe reissue of White Pony. The reworking of “Teenager” comes courtesy of The Cure frontman Robert Smith.

It’s no secret that The Cure have been a major influence on Deftones, and getting the iconic Robert Smith to remix “Teenager” must’ve been a thrill for singer Chino Moreno and company. The original “Teenager” is already a mellow track by Deftones’ standards, and Smith slows it down even more by taking away the drum beat and letting a droning yet melodic undercurrent put the spotlight on Moreno’s vocals.

The “Teenager” remix is accompanied by a music video, depicting a statuesque head slowly spinning around in a body of water.

Previously, Deftones covered The Cure’s “If Only Tonight We Can Sleep” in 2004 for the MTV Icon tribute to the legendary UK band. They performed the song again in 2018 during the Robert Smith-curated Meltdown festival in London.

White Pony x Black Stallion will be released on CD and digitally December 11th, with pre-orders available here. A vinyl version will arrive on April 16, and can be pre-ordered at this location.

In addition to the 20th anniversary edition of White Pony, Deftones recently released their ninth studio LP, Ohms. That album is available here.

Watch the video for Robert Smith’s remix of “Teenager”, followed by Deftones’ 2004 performance of The Cure’s “If Only Tonight We Can Sleep”.