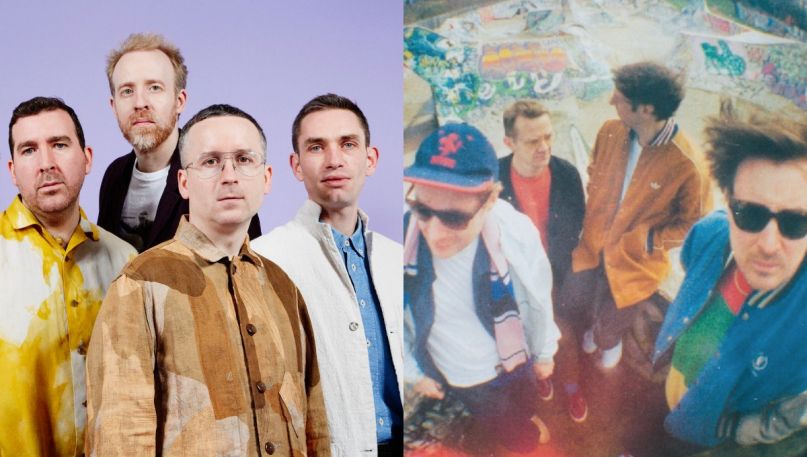 British art-rock band Django Django announced their new album, Glowing in the Dark, in an exclusive Origins feature on Consequence of Sound last month. In anticipation of the record, they’re now sharing a fresh remix of the title track helmed by fellow Londoners and dance floor lovers Hot Chip.

The original “Glowing in the Dark” seemed to borrow a page from English electronic music veterans The Prodigy (especially that early 2000s dirty breakbeat), but Hot Chip take a decidedly different route for their version. There’s still a steady, heady pulse to the clubby jam, however, Hot Chip add in a few extra warped and dizzying effects to make it doubly intoxicating.

“We were stoked out of our minds to get our hands on this track from Django Django; so strong and fun and addictive!” Hot Chip gushed in a statement. Django Django returned the praise, commenting, “We’ve been huge fans of Hot Chip from the beginning and had the pleasure of supporting them live a few times now so we’re really chuffed to have a remix from them.”

Stream the “Glowing in the Dark” remix below to see if you love it just as much as these guys do. Django Django’s new album officially lands February 12th via Because Music; one of its other singles, “Spirals”, was recently reworked by MGMT.

For more of the Hot Chip crew, they teamed up with Pulp’s Jarvis Cocker on the track “Straight to the Morning” back in October. A few weeks prior, the group released its Late Night Tales compilation, which boasted a cover of The Velvet Underground.