She also competes against a super fan in Miley trivia 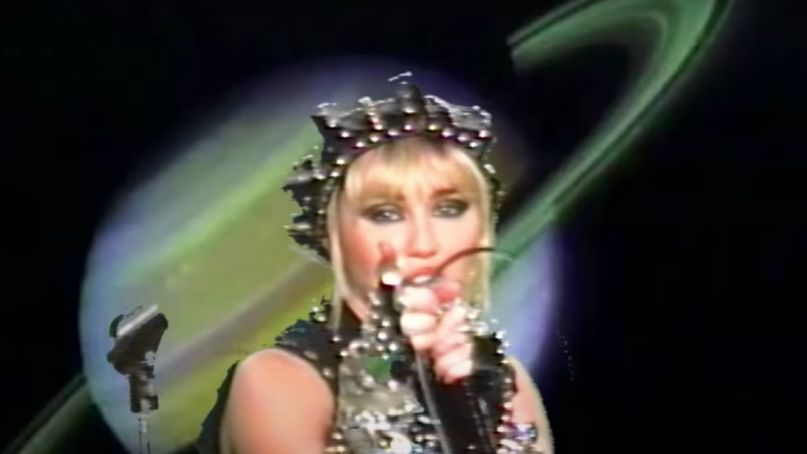 Miley Cyrus’ new LP Plastic Hearts is the No. 1 rock album in the country. She celebrated the news on Jimmy Kimmel Live! with a green screen and a performance of her new song “Prisoner”.

Cyrus dialed in from her home studio in Los Angeles. She and Kimmel quickly fell into a rhythm during the interview, with her natural party-hard energy finding a kindred spirit in his frat house wit. He began where many of us would have liked to begin: by asking if she had a mullet. The pop rocker then explained the origins of her current style, saying,

“All of us had to adjust. A lot of things shutting down, keeping us from doing our standard routines. One of them was going to get a haircut for me. My mom offered — I already had bangs, bangs were getting long — she said, ‘I can cut your hair but I only know how to do one hairstyle. And I’ve been doing this since 1992 for your dad and your brothers.’ All my mom can do is a mullet. So I had one option and I needed it.”

In reference to dad Billy Ray Cyrus, she added, “I think there’s something genetically where it just kind of grows naturally shorter up top and longer in the back.”

When it came time to perform her new hit “Prisoner”, Cyrus did so without the benefit of the song’s usual partner Dua Lipa. But she wasn’t alone. Through the magic of green screen technology, Cyrus acted as her own backup dancer. While she stood at the mic stand and sang, the screen flickered from outer space to student protests to a multi-disc CD changer. Meanwhile, this second Cyrus injected humor into the proceedings, joining a cartoon elephant conga line and twerking on the Statue of Liberty.

Elsewhere in the interview, Cyrus lobbied to play at Biden’s inauguration, said that she had prepared a sad violin version of “Party in the USA” if Trump won, and faced off against a super fan with Miley Cyrus trivia. Check out the interview and “Prisoner” below.

In November, Cyrus admitted to a relapse, and said she got sober in the first place to avoid the 27 club. Last week she covered “Doll Parts” by Hole.