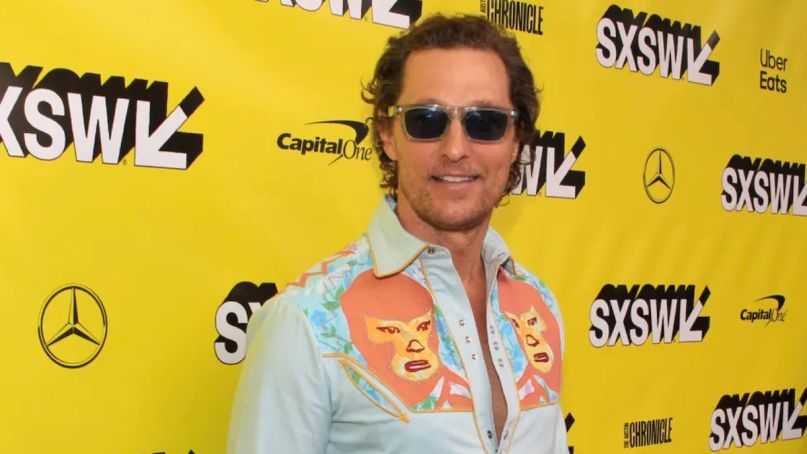 During a recent appearance on comedian Russell Brand’s podcast, Matthew McConaughey explained his “aggressively centrist” political views while taking both the left and right to task.

McConaughey has been espousing a burgeoning political interest recently, even going so far as to mull over the idea of running for Governor of Texas. However, the actor sees politics as a “broken business” split too adamantly along divisive lines. On his Under the Skin podcast, Brand asked McConaughey about the “judgement” and values of the left-right divide, specifically noting the “condemnation and criticism” of “ordinary working people” who voted for Brexit or Trump. The actor responded that “the two vehicles on either side of the political aisle are so far apart, their fucking tires aren’t even on the pavement anymore.”

Being centrist, he suggested, was actually “a dare” these days. That sort of terminology can both “relate to a lot of people on the right” who need to be told it’s “an aggressive move to actually stay home” during COVID-19, and keep the condescending tone of the far left in check.

“There are a lot (of people) on that illiberal left that absolutely condescend, patronize, and are arrogant towards that other 50 percent,” McConaughey said. He recalled the left’s “denial” that Trump won the 2016 election, arguing that their response to that shock only further wedged a divide between the political sides.

Of course, now with Joe Biden as the President-Elect, we’re seeing the same thing from the other side. “Now you’ve got the right that’s in denial, because their side has fake news,” he continued. “And I understand, they’ve been fed fake news. No one knows what the hell to believe, right? So they’re putting down their last bastion of defense.”

The answer, McConaughey proposed, is for the left to adjust their messaging and their metrics. As an example, he pointed to the left’s massive get out the vote campaigns. That should be something universally praised, but as McConaughey noted,

“But then they can’t help themselves; at the very end of it they go, ‘So we don’t let those criminal bastards get back in office!’ You’re like, ‘No, don’t say the last part! You lost 50% of your audience.’ That’s why 50% of the nation looks at us in Hollywood going, ‘Another celebrity over there, West Coasters and the elites in the Northeast. That’s what you all say.’ Even from a sales point of view, don’t tab that ‘gotcha’ on the end, and then your audience is twice as big. And you’re getting what you want… you’re getting two times as much if you just didn’t tab on that little stick it to ’em at the end. The left is gonna have to understand the science of the values of meet you in the middle.

You can watch a snippet of the discussion below. McConaughey recently published his new memoir, Greenlights.