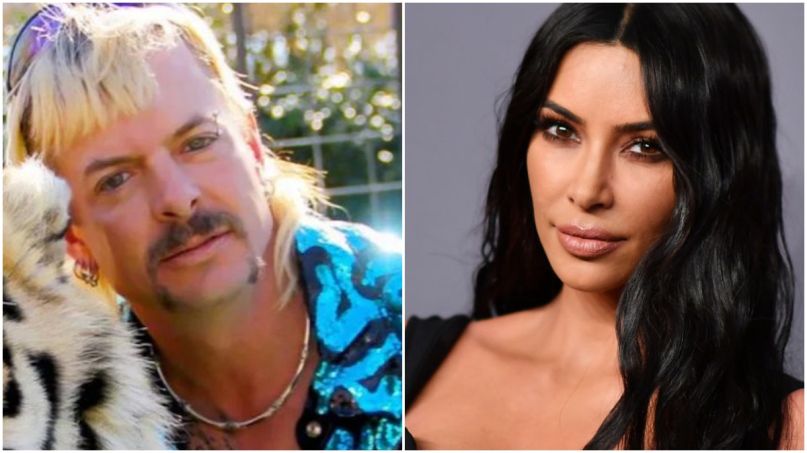 In case you didn’t get a chance to watch the viral Netflix series, Exotic, aka Joseph Allen Maldonado-Passage, has been locked up since April 2019 after being convicted of trying to hire a hitman to kill his nemesis, Carole Baskin, as well as 17 counts of animal abuse. The Tiger King series ends with Exotic insisting his innocence over jail phone calls, and shortly after the show aired, Exotic stated his intention to issue a formal pardon request to Donald Trump, who Exotic donated to during his 2016 campaign in hopes of meeting the then-candidate.

Trump promised to “take a look” at a pardon request, so back in September, Exotic went ahead and sent a 257-page letter to the White House pleading his case. There’s seemingly been no movement since then, which is why Exotic has now sent a desperate letter to Kardashian, who signaled her interest in his story by posting photos of her and her kid’s Tiger King Halloween costumes on Instagram. Kardashian has an exiting relationship with the White House having previously lobbied Trump to pardon 63-year-old Alice Johnson of a life sentence drug charge.

“I know you have never met me and may never want to however I do believe that you hold the values of our justice system dear to your heart,” Exotic wrote in the letter obtained by ET. “I am writing you this letter not as Joe Exotic but as the person Joseph Maldonado-Passage, asking you to please help me by just taking 10 minutes out of your life and placing a call to President Trump to look at my 257 page pardon it’s all the evidence I’m innocent and ask him to sign my pardon so I can return home to [my husband] Dillon [Passage] and my father.”

“I have lost 57 years of work, my zoo, my animals, my mother has died, my dad is dying and I’ve been taken away from my husband who I love dearly,” Exotic added. “Everyone is so busy making movies, getting interviews, selling stuff and dressing up like me that everyone forgot I’m a real live person in prison and kept from even telling my own story for something I didn’t do.”

Exotic also recently sent a letter to Oklahoma’s governor, Kevin Stitt, with a similar plea. “I am not only asking President Trump for an immediate pardon, but I am asking Governor Stitt to place a call to President Trump and ask him to sign my pardon,” Exotic wrote in a message mailed to FOX23 Investigative Reporter Janna Clark.

Given that Trump’s presidency ends in 41 days, you can understand Exotic’s urgency in obtaining a pardon. Once Joe Biden takes over the White House, one would assume pardoning reality TV star personalities will become much less of a priority.