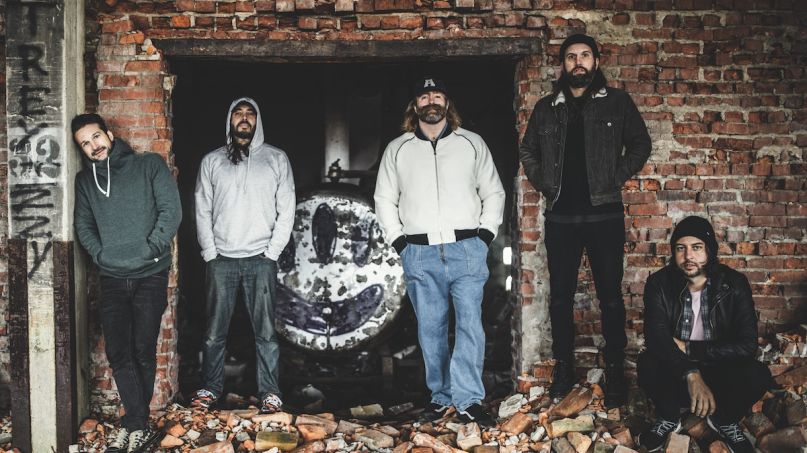 Every Time I Die, photo by Chuck Abbott

Every Time I Die have returned with the double single, “A Colossal Wreck” and “Desperate Pleasures”. They’ve also announced a livestream event for December 19th.

The songs mark the first new music from the Buffalo, New York hardcore act since 2016. In the interim, the band’s lost none of their mathematic prowess and virtuosic precision. If the rest of Every Time I Die’s forthcoming ninth studio album lives up to these tracks, fans are in for another excellent slice of passionate metal.

As the titles “A Colossal Wreck” and “Desperate Pleasures” imply, there’s more than a little of 2020 that’s seeped into the new material. Vocalist Keith Buckley stated in a press release that the songs are “two sides of the same reactionary coin.”

“While ‘A Colossal Wreck’ looks around at the current state of the world and says ‘life is a punishment and only the worst of us thrive’ and, ‘Desperate Pleasures’ takes a more optimistic approach and renounces the nihilistic/accelerationist attitude of the voice that came before,” Buckley explained.

He continued, “It says that without hope, even in the face of such universal anguish, only death is certain and to give up now when those around us need it most is a treacherous act of pure cowardice. That said, I’m not sure which is worse, being a coward or being a cynic. Probably a coward. At least cynics have a sense of humor.”

The tracks were produced and mixed by Will Putney, who is ostensibly working with Every Time I Die on their new album.

To support the new double single, the band will stream a virtual concert on December 19th. Dubbed “Every Time I Die’s Online Telethon Extravaganza”, the event sees the band emerging from quarantine for its first livestream show. It goes live at 5 p.m. ET on the 19th, and you can get tickets at this location.

Listen to the new singles and check out the single artwork and livestream poster below.