"A booster with amp-like sound for shitbags" 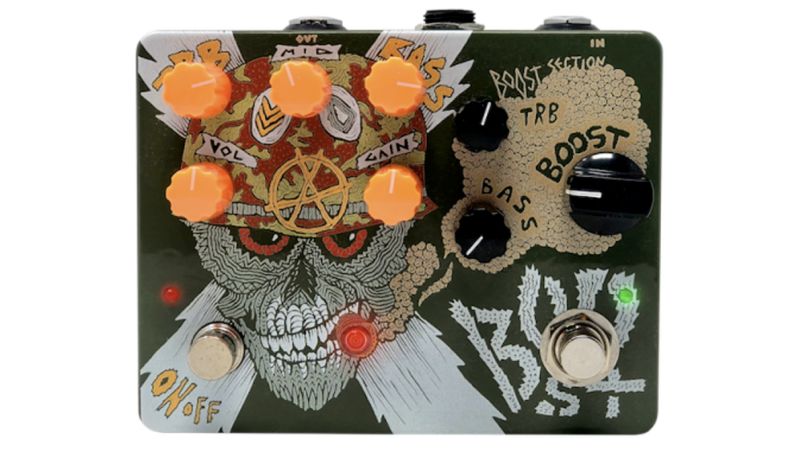 Stylized with the infamous Sargent D mascot from Ian’s crossover thrash band Stormtroopers of Death (S.O.D.), the two-in-one pedal functions as a boost/pre-distortion EQ control and has another section for amp modeling that emulates the guitarist’s S.O.D.-era tones. To top it off, as you play, the tip of Sgt. D’s cigar lights up red.

“Get this if you want to stop shitting in people’s ears with your ass tone,” states the Sgt. D (aka Ian) in the product description.

“Scott knew what he wanted — a ruthlessly vicious pedal that captures his S.O.D. amp tone,” David Karon of KHDK wrote. “Of course, the absolute maniac that he is, he also wanted it to work as a magical booster and make even a shitty $50 amp sound like a monster. He then requested that the pedal have wheels and a built-in drone and follows him around whilst humming the ‘Knight Rider’ theme, but our engineer Antonin Salva drew the line at that.”

This launch design series pedal is limited to 250 pieces and is already sold out. As Sgt. D himself warns in the product description: “If I see you flipping this on eBay I’ll stab you in the liver.”

“Scott was incredibly hands-on throughout the process,” Karon added sarcastically. “He literally never detached his hands from his body.”

The pedal isn’t the only side venture occupying Ian during Anthrax’s downtime. The band has also been working on a graphic novel adaptation of Anthrax’s Among the Living, which is due out next year. The band also released a signature bourbon and “Stop Spreading the Disease” hand sanitizer.

For more on the pedal, visit KDHK’s website. Check out videos featuring Ian playing with the new pedal below. Browse more KHDK pedals via Reverb.