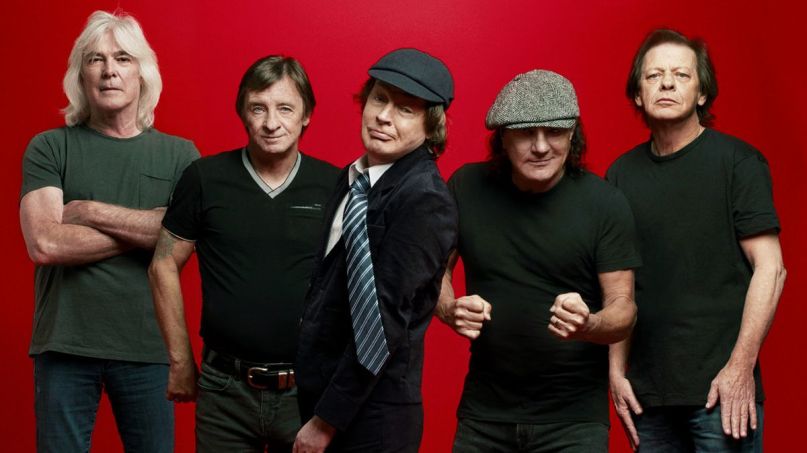 AC/DC have unveiled the music video for “Demon Fire”, the latest single from the legendary band’s excellent new album, Power Up.

The video depicts a muscle car cruising through an apocalyptic desert illuminated by neon signs. The footage evokes films like Death Proof and Sin City but without the violence. The clip’s helmeted protagonist is content to simply cruise this dark strip of road as the song plays. Previously, AC/DC had shared the stylized performance clip for “Shot in the Dark”.

Power Up dropped on November 13th to widespread critical acclaim, notching a Top 5 spot on Heavy Consequence’s list of the Top 30 Metal + Hard Rock Albums of 2020. The LP sees AC/DC doing what they do best, as the distinct and catchy riffs of Angus Young pair with the imitable vocals of frontman Brian Johnson. With past members Phil Rudd and Cliff Williams also back in the fold, Power Up is as tight as the band’s sounded in years.

In a new interview, Johnson reiterated that the album was meant as a tribute to the late Malcolm Young, who passed away in 2017. After all, AC/DC’s distinct sound was Malcolm’s idea, as Johnson tells it.

“This whole album was done, right from the get-go, in the studio, it was this feeling… We’d just lost Malcolm, and we wanted this album to be a tribute to Malcolm, to our leader, the man who was right there at the inception,” Johnson told iHeart Radio (via Blabbermouth). “It was his idea — the idea of making AC/DC have a sound that nobody else could copy. And it was in his mind all the time to do that, and he kept it like that all the way through, which I think is amazing in itself. But when we went into the studio to do this, we knew that what we were doing was a tribute to the great man himself. And we knew he’d be lookin’.”

The album’s lead track, “Realize” has a particular connection to Malcolm. As Johnson explained, Angus and Malcolm had worked on the song together for a “fair bit of time” years ago. It only made sense to put it first on the tracklist for Power Up. Indeed, the backing vocals sound eerily like those of the late Malcolm.

“From the very start, Angus was saying the first song we’ll do will be ‘Realize’, because he wanted to set the bar on the sound, the riffs,” Johnson said. “We’re not spiritual guys, but when you hear them backing vocals come in, which was always Malcolm’s terrain — that was his property; that was always Malcolm’s growling voice and all of that… So, in ‘Realize’, we put all that in, but it had to be a rock and roll song. And that’s why I enjoyed singing it so much. It’s just so simple. It’s just rock and roll, and it’s just a joy for a rock and roll singer to get that thrown at him.”

No doubt, Malcolm would be proud at what AC/DC achieved with Power Up. Pick up the album here and check out the video for “Demon Fire” below, followed by Brian Johnson’s aforementioned interview with iHeart Radio.