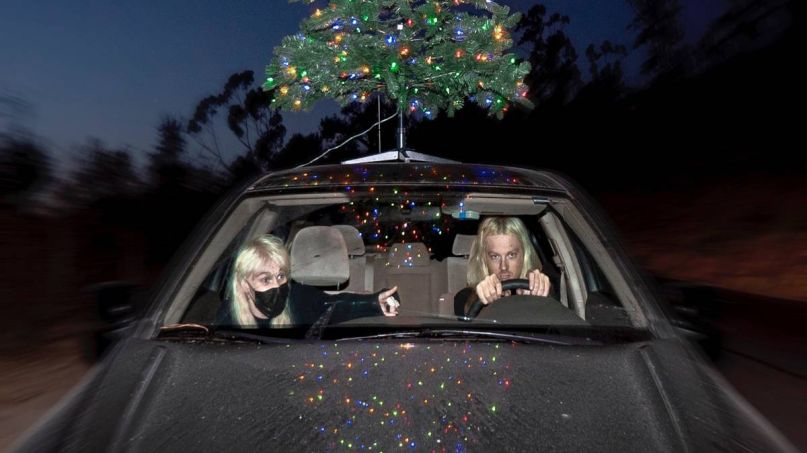 Consider the halls gec’d. The experimental pop duo 100 gecs have returned with a new Christmas song called “sympathy 4 the grinch” that wraps their signature quirks in silver and gold.

Laura Les and Dylan Brady pack so many influences into their music that there’s no telling where they’ll draw from next, but this tune finds a cheerful middle ground between their neon electro-pop and early 2000s pop-punk. The ska-like verses sound like chiptune’d versions of a Reel Big Fish song, while the bouncy pre-chorus and crunchy guitar riffs during the hook throw it back to Good Charlotte’s “The Anthem”.

Lyrically, the song is almost somewhat of an anti-Christmas tune. After Les complains that she “Wanted some speakers, Xbox, and t-shirts / I’ve been good like every single day/ Looked under my tree, my box was empty/ Santa made an enemy that day,” her and Brady travel to Santa’s workshop to hijack his coveted sack and drive off with the items from her wishlist.

In that sense, the song feels like a spiritual sibling to their 1000 gecs standout “stupid horse”, another ska-indebted banger about swiping a big bag of goodies (cash) and burning rubber to get the hell out of there. Take a listen to “sympathy 4 the grinch” below.

The track caps off a pretty prolific year for the hyperpop luminaries. Back in July, they dropped a loaded remix album of their 2019 record that featured Charli XCX, Rico Nasty, Fall Out Boy, and others. They also guested on HEALTH’s CYBERPUNK 2.0.2.0 and 3OH!3’s return single “Lonely Machines”, and Brady racked up some production credits on Charli and Rico’s new albums.