Grimes Gets Tortured by Kraft Punk on The Eric Andre Show: Watch

She was pregnant at the time 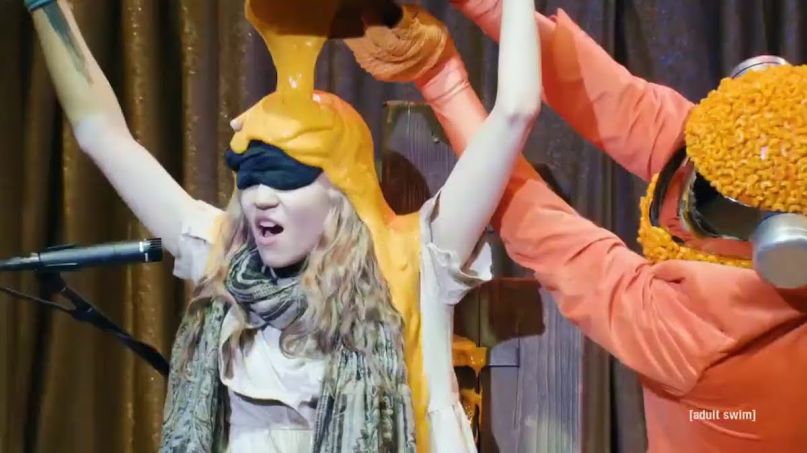 The Eric Andre Show is infamous for its painful surprises and unpredictable stunts, many of which come at the expense of the show’s guests. On the latest episode, comedian and host Eric Andre invited Grimes on to be punished atop a medieval torture rack in a series of bizarre and gross ways — including getting a bucket of nacho cheese dumped over her by Kraft Punk.

Grimes’ segment, cleverly titled “Grimes & Punishment”, aired during the closing credits of the latest Season 5 episode. In it, the pop star can be seen standing atop a wooden step with her arms tied up in the air while she sings a traditional song. Various characters take turns shocking her with electricity, hitting her legs with rods, and pouring some type of liquid on her feet.

At the end of the video, the show’s recurring character Kraft Punk — a cheese-themed robot whose handmade costume resembles those of Daft Punk — steps onstage to pour melted cheese over Grimes’ head. It’s gross, but Grimes takes it all in stride like a champ. Watch it below.

As Stereogum points out, Grimes and Andre are friends, and it was her idea to appear on the show as a musical guest despite being pregnant at the time. “She goes to me, ‘You know, you never have women on as the music guest.’ And I explained to her, it’s because we always torture the musical guest… She goes, ‘Yeah that makes sense, but I wanna do the show. Fuck it, you can torture me!'” he told Complex. “Then later I found out she was pregnant and hadn’t announced it yet! I was like, ‘You just talked me into torturing a pregnant woman!’ And she was like, ‘Yeah, but it was fucking awesome!'”

Season 5 of The Eric Andre Show premiered on Adult Swim on October 25th, and every episode since then has been a wild ride. Hannibal Buress quit on air, Lizzo debuted a surprise spinoff, and Andre got John Cena to throw him into a metal shelf — a stunt that landed him in the hospital immediately afterwards.

Thanks @ericandre for letting me get tortured on the show! https://t.co/WmXNwzm7Yd