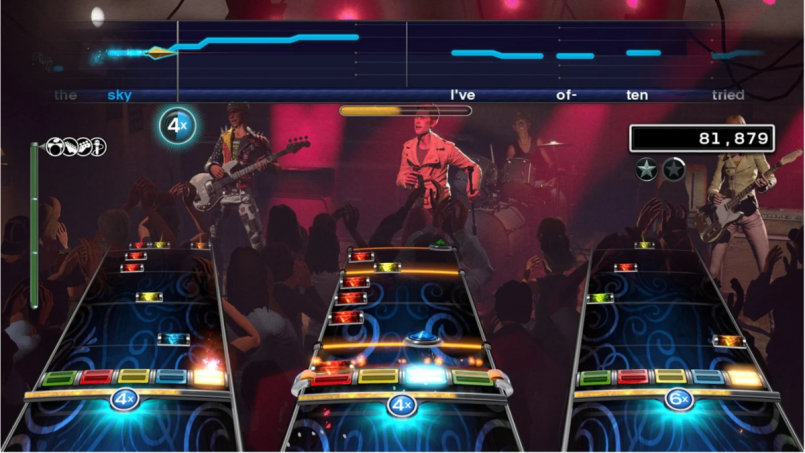 Rock Band
view all
Next

I remember taking drum lessons when I was 10 years old. I desperately wanted to learn how to play the drums, but I had a difficult time wrapping my head around certain theoretical concepts. This wasn’t the component I was even interested in. When I received an iPod Nano as a birthday gift two years later, I realized what it truly was that I wanted to learn. I had purchased songs by AFI, Rise Against, and Blink-182 for my new high-tech device, and I wanted to learn how to play them on my drum kit.

At my drum lessons, we primarily played marching music and elementary jazz. I’m still grateful for the fundamental training I received through those lessons, but I never really had the opportunity to play the music I wanted that early in my life. But that’s when the Rock Band series, now 13 years old, was at its cultural zenith. You could walk into any of your friends’ houses and see Rock Band instruments haphazardly strewn across the floor or lazily piled in a living room corner. When I had started teaching myself how to play drums for songs I downloaded from iTunes, I understood that playing in expert mode for Rock Band drums was as identical as you could get to playing real drums without a proper kit.

Now, as someone who’s played drums, guitar, bass, and other instruments for a decent chunk of my life, I admit that some Rock Band songs are simply cruel. Whereas some songs are challenging but still enjoyable, others are exceptionally unfair. But that’s part of the joy of them. There’s a reason that a group of friends trying to get through nearly any death metal song in the Rock Band franchise usually results in a laughing fit.

So, we decided to take a deep dive into all four Rock Band titles (and a little DLC) to see what the most difficult songs from the series are. We’ve also supplied some easier alternatives for each song, but if you’re feeling up to the challenge, then dust off those plastic instruments and plug in your seventh-gen gaming consoles.