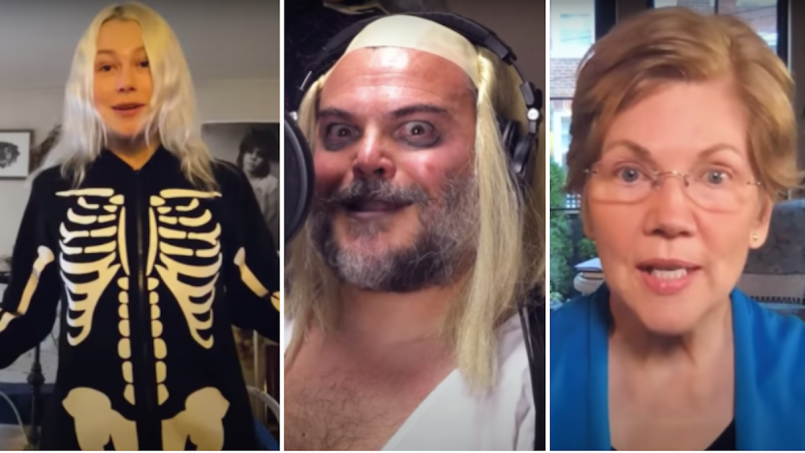 Tenacious D are ready to “Time Warp” Donald Trump right the fuck out of the White House. In a new cover of the Rocky Horror Show classic, Jack Black and Kyle Gass have teamed up with Phoebe Bridgers, Senator Elizabeth Warren, and more to entice voters to “jump to the left.”

This “Rocky the Vote” extravaganza takes the place of Tenacious D’s “The Purple Nurple Tour – Twisting Hard To The Left!”, which was supposed to encourage voter registration in swing states around the country. Unfortunately, the very president they hoped to defeat did such an incompetent job of handling the coronavirus pandemic that touring became impossible. The bright side, though, is “Time Warp” is at least as gobsmackingly glorious as anything you might have seen live. Black’s hair-metal vocals approach perfection, the performances are goofy and fun, and for a video featuring several prominent politicians, it thankfully eschews the raunchiness of the original.

Black wore a bald cap and a plunging v-neck shirt to step into the role of Riff Raff, and while Gass sang the part of Columbia, he did so in what appeared to be a Walmart costume of a “Karen.” Still, Tenacious D managed to capture some of the gender-bending fun of the 1973 musical and 1975 movie, and the variety of starry cameos will keep viewers on their toes.

A limited-edition vinyl edition of the single will soon be available through the Tenacious D webstore, with proceeds benefitting Rock the Vote. Last month, the band performed a medley from their 2018 album Post-Apocalypto  on Jimmy Kimmel Live!

If you want to make this a “Science Fiction/Double Feature”, make sure to check out the Rocky Horror Picture Show cast reunion benefitting Wisconsin Democrats.