Tame Impala Perform “Elephant”, “Is It True” in an Empty Soccer Stadium: Watch

To coincide with the impending release of FIFA 21 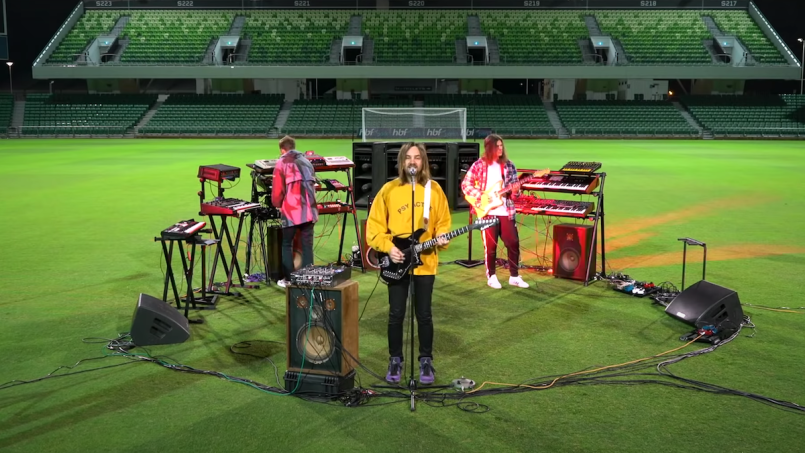 After months of live music lockdown, artists are finally stepping outside of their homes and returning to venues. HAIM just played at The Forum, and Trey Anastasio has a Beacon Theatre residency coming up. Sure, HAIM’s performance took place in The Forum’s parking lot and Anastasio’s virtual residency will be audience-free, but the point is the venues aren’t vacant anymore. Now, Tame Impala have joined their ranks and staged their own physical performance in the outside world, as they recently took over a soccer stadium for a two-song set.

Kevin Parker and his pared down three-piece version of Tame Impala set up in the center of the pitch at HBF Park in Perth, Australia. They delivered the Lonerism favorite “Elephant” and “Is It True” off their latest full-length, February’s The Slow Rush. Watch the spacious performance below.

The video comes in celebration of the impending release of FIFA 21, which arrives on October 9th. Tame Impala’s “Is It True” features on the soccer video game’s soundtrack, alongside Dua Lipa’s “Love Is Religion” (The Blessed Madonna Remix), Royal Blood’s “Trouble’s Coming”, 070 Shake’s “Morrow”, and more.

Tame Impala are hoping they’re able to actually fill stadiums soon. They recently announced rescheduled North American tour dates for summer and early fall of 2021. Tickets for the pandemic-postponed shows will be honored at the new dates, and you can also look for them here. Until they’re safely back on the road, the band will stay socially distanced for Tiny Desk (Home) concerts and late night appearances.