Rammstein Confirm They Are in the Studio Working on New Music

The band shares a photograph from inside the studio 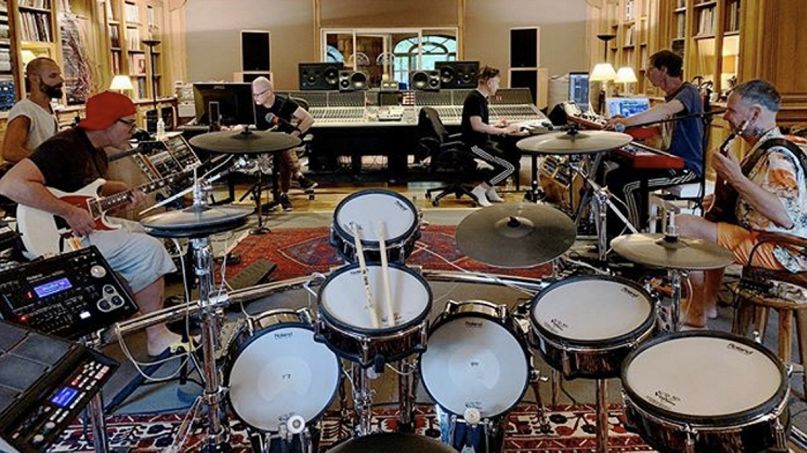 Rammstein are currently working on new music for their next album. The band shared a pic from the studio on Instagram, confirming a previous report from a fan site.

The members of Rammstein appear to be social distancing in the spacious recording room, which is ostensibly at La Fabrique in the Saint-Rémy-de-Provence of France, per the prior report. The band and crew were spotted in the area prior to the sessions, leading to rumors that they’d assembled to work on new music. Rammstein were previously in the studio to record their untitled 2019 album.

The German industrial-metal act captioned the photo: “Sadly no tour this year — but it’s great to be back in the studio!”

Rammstein were supposed to embark on a massive stadium tour this year, dates that were rescheduled to 2021 due to the pandemic. Instead, they’ve taken advantage of the downtime to work on songs and now record them. There was a 10-year gap between the last two Rammstein albums, but it looks like fans won’t have to wait so long for a follow-up to the untitled LP.

In other band news, Rammstein are revisiting their groundbreaking 1995 debut album, Herzeleid, announcing a 25th anniversary remastered edition that arrives December 2nd. In addition to vinyl and CD reissues, the album will be available in high-res digital for the first time ever. The set features reworked, minimalist artwork in addition to the remastered audio.

You can pre-order the 25th anniversary edition of Herzeleid via Rammstein’s online store and Amazon. Check out the band’s Instagram studio update below.

Sadly no tour this year – but it’s great to be back in the studio! Photo: @christophschneider_official