Produced by Jeff Bhasker and co-written by Paul Williams 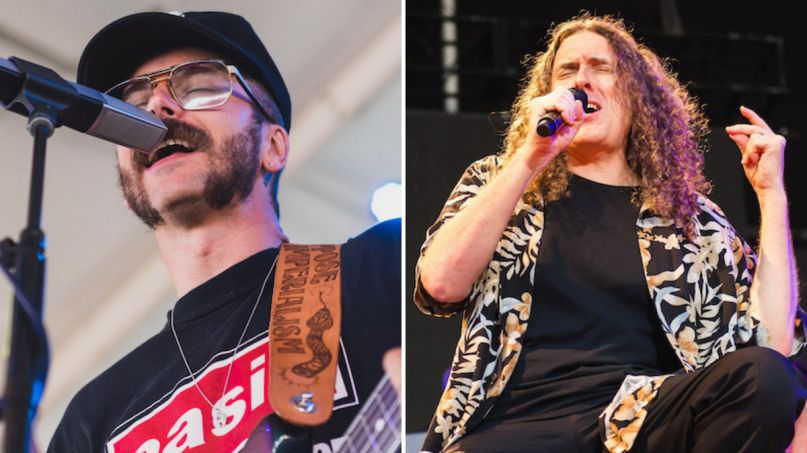 Portugal. The Man and “Weird Al” Yankovic have joined forces once again, but this time it’s not to turn beloved indie songs into polka jams. Instead, they’ve collaborated on a new track, “Who’s Gonna Stop Me”, in honor of Indigenous Peoples Day.

Produced by the Grammy-winning Jeff Bhasker (Kanye West, Rihanna) and co-written by the legendary Paul Williams (David Bowie, The Love Boat theme), the song also features contributions from The Last Artful, Dodgr. A peacefully powerful call for freedom, the opening verses are meditative before a rattling drum beat turns it towards invigorating. “Sneaking out, jumping over backyard fences/ We’re all just looking for freedom,” sings “Weird Al” on the second verse. “I’ve got an appetite for living, but this life is gonna eat me alive.” Yeah, this a far more serious Yankovic than The Food Album, and marks the famed parodist’s first non-comedic release.

“Who’s Gonna Stop Me” ties itself even closer to Indigenous peoples with its music video. Co-directed by Aaron Brown and Josué Rivas, the clip stars a number of Indigenous artists and leaders, such as Acosia Red Elk, a champion jingle dancer of the Umatilla people of Oregon. Check out the visuals below.

“Who’s Gonna Stop Me” comes as Portugal. The Man’s PTM Foundation has announced a fundraising campaign for DigDeep’s Indigenous-led Navajo Water Project. The NWP seeks to expand access to clean water for the over 30% of Navajo Nation members living without it in new Mexico, Arizona, and Utah. PTM have produced a limited-edition “Water Is Life” T-shirt to benefit the Navajo Water Project and the Confederated Tribes of Warm Springs in the band’s Oregon home state. The band themselves will match funds raised through sales on their website up to $20,000.

Watch the “Who’s Gonna Stop Me” video ahead, and read a full statement from Portugal. The Man on the song, why it’s important to support Indigenous peoples, and their experience working with “Weird Al” Yankovic.

“They say barbwire was the death knell of the cowboy. It was the end of the open range and the end of open pastures. Before the cowboys, for time immemorial, the indigenous peoples of the Americas looked to the earth as their spiritual authority. They did not parcel the earth any more than Christians, Muslims, or the Jewish faith would parcel out God. That would be sacrilege. But along came the colonists and they did just that. After the genocide of the indigenous peoples, once our white picket fences and barbwire and border walls were erected, the ancestors of the colonists made a lot of technological progress. We invented cars, skyscrapers, cheeseburgers, and smartphones! And yet now, at the dawn of the 21st century, mother earth is reacting to the past few hundred years of neglect. The earth is sending out pandemics, fires, hurricanes, and so on. The indigenous say that it’s the earth’s immune system calibrating itself. The indigenous people of the Americas, and the rest of the world, have stewarded their sacred planet for tens of thousands of years of recorded history — likely more. The PTM Foundation turns a conscious heart to the ancestral youth of the indigenous elders to shepherd our sacred planet and peoples through this time of difficulty.

The PTM Foundation is a platform for artistic collaboration between materialist culture, the arts, and indigenous paradigms. For the video for ‘Who’s Gonna Stop Me’ we created a collaboration between indigenous artists, friends, artistic collaborators, ‘Weird Al’ Yankovic, and Indigenous organizations to explore the possibilities of collaboration in this new time. To us ‘Weird Al’ Yankovic has always been a figure of playful boundary-breaking. His work makes us take less seriously, the things that we take so seriously, like what’s cool, or what’s trendy. ‘Weird Al’ Yankovic has been an inspiration for Portugal The Man since their inception until now. In the tradition of the indigenous cultures of the western North American territories, the Coyote represents the trickster and the maker of new worlds. The trickster is an archetype that can be found in nearly all indigenous and ancient cultures; the trickster not only is playful and a comedian but through their playfulness, they connect people. PTM Foundation sees music and art as a similar tool to make new connections and we consider this video to be the beginning of a campaign of many collaborations to come. PTM Foundation strives to forge bridges between the materialist contemporary culture in which we are immersed and the indigenous stewards to whom we strive to give a larger voice.”