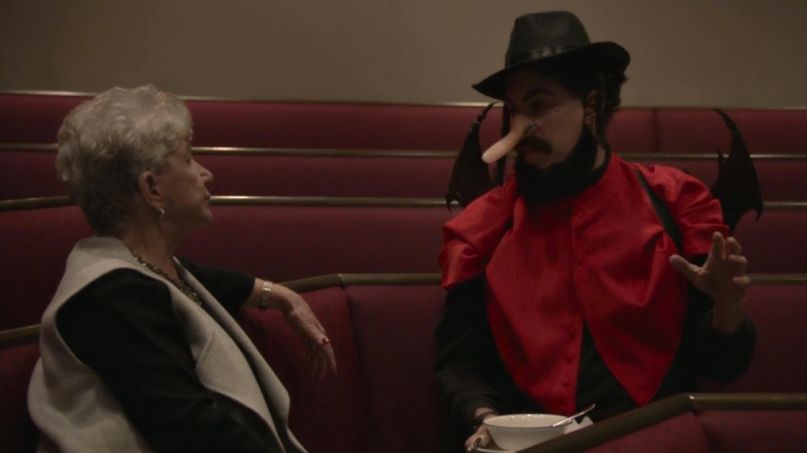 A lawsuit filed by the estate of a Holocaust survivor who appears in Borat Subsequent Moviefilm has been dismissed by a Georgia judge.

Judith Dim Evans sat for an interview with Sacha Baron Cohen’s Borat character prior to her passing over the summer. Cohen, himself a Jew, dressed like a Nazi caricature for their meeting in a synagogue, as he portrayed Borat as an ignorant Holocaust denier. Evans’ daughter, Michelle Dim St. Pierre, filed for an injunction ahead of the film’s release, alleging that her mother hadn’t given permission to use her likeness in the movie and thought she was sitting for a serious interview. They also claimed the scene was used to “mock the Holocaust and Jewish culture.”

However, the lawyer for Amazon, Russell Smith, was able to provide evidence that Evans in fact signed a release (via Variety) and was aware of the movie’s satirical nature. She was also apparently informed after the interview that Cohen himself was actually Jewish. The film is even dedicated to Evans with a title card at the end, and the filmmakers worked with her family to set up a website in her honor.

In a statement given after the ruling, Smith said,

“The lawsuit was dismissed, unconditionally. The lawsuit is over. Sacha Baron Cohen was deeply grateful for the opportunity to work with Judith Dim Evans, whose compassion and courage as a Holocaust survivor has touched the hearts of millions of people who have seen the film. Judith’s life is a powerful rebuke to those who deny the Holocaust, and with this film and his activism, Sacha Baron Cohen will continue his advocacy to combat Holocaust denial around the world.”

There’s word that the Borat team are working on another way to pay tribute to Evans, as well. They’re planning to release footage cut from the movie in which she recounts her full World War II story, possibly making it available via Amazon Prime’s X-Ray bonus content feature.

While Borat goes to lengths not to make Evans look bad, it does quite the opposite in terms of the Trump White House. Scenes catching Rudy Giuliani in a compromising situation with Borat’s “15-year-old daughter” have captured the nation’s attention in the last week. The incident has led to some predictable back-and-forth between Trump and Cohen.