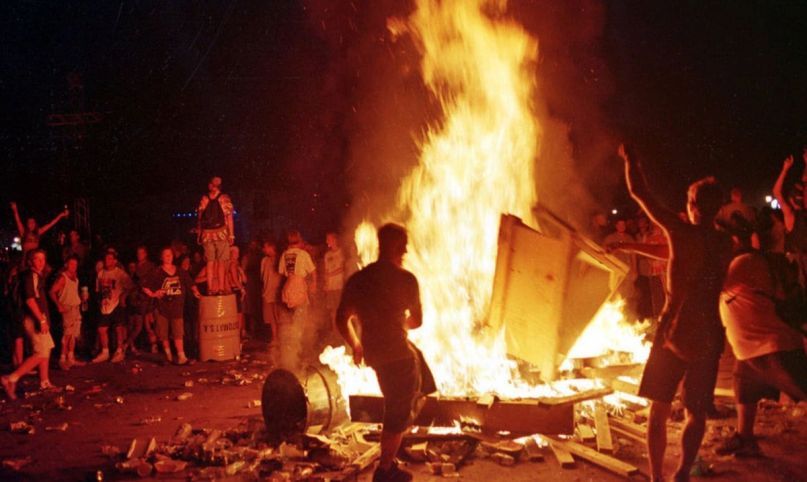 Despite being envisioned as an event of “peace and love” like its forefather, Woodstock ’99 was a complete shit show. The three-day music festival featuring Limp Bizkit, Red Hot Chili Peppers, Rage Against the Machine, and Insane Clown Posse devolved into squalid havoc, with arson, injuries, and sexual assaults broadcast live on MTV to horrified audiences around the world. It was the subject of a riveting eight-episode podcast produced by The Ringer, and now, it’s getting the Netflix documentary treatment. You thought Fyre Fest was bad? Hold on to your red baseball caps.

Deadline reports that the as-yet-untitled docuseries will be produced by London-based Raw, who brought us the bonkers true story film Don’t F**k With Cats. BBH Entertainment is also attached to the movie, which produced Depeche Mode: SPiRiTS in the Forest. Production has already begun, with sources describing it as the “real story behind how ‘three days of peace, love and music’ went down in flames.” Literal flames.

Of course, Fred Durst’s nu-metal band is bound to make an appearance. There were many problems with the festival, but things really took a turn on the last day during their set. As they performed “Break Stuff”, the Limp Bizkit frontman infamously incited the crowd to actually break stuff (“I don’t think you should mellow out; that’s what Alanis Morissette had you motherf*ckers do!”). His provocations led to widespread vandalization and riots among the 400,000+ audience members, many of whom had already suffered through sweltering heat and massive mud sludge from the previous day’s rain and poor sanitation.

There will also likely be a segment devoted to the Red Hot Chili Peppers, whose festival-closing set was taken over by fire. As the story goes, an activist group in attendance passed out candles to the crowd as part of a planned anti-gun vigil during the Peppers’ set. However, when it came time to lighting them, things quickly went awry — uncontrolled bonfires erupted and plywood pieces from the Woodstock Peace Wall caught fire. MTV aired the entire spectacle live, but Deadline also mentions that there will be “unseen archive footage” of the mayhem.

No word on when the cursed festival documentary will drop. In the meantime, Questlove of The Roots is producing Black Woodstock, about the Harlem Cultural Festival of 1969, a decidedly more peaceful event.

Previous Story
Behemoth’s Nergal to Musicians During Pandemic: “You Can Cry Like a Baby or … Do Something with the Situation”
Next Story
The Biden-Harris Campaign Comes to Animal Crossing
Popular
More Stories
[fu-upload-form form_layout="media" title="Submit Your Photo"][input type="hidden" name="ugc" value="1"][/fu-upload-form]