Originally planned for an appearance on The Voice in 2016, the digital recreation recently made its debut on a Scott Storch-hosted livestream 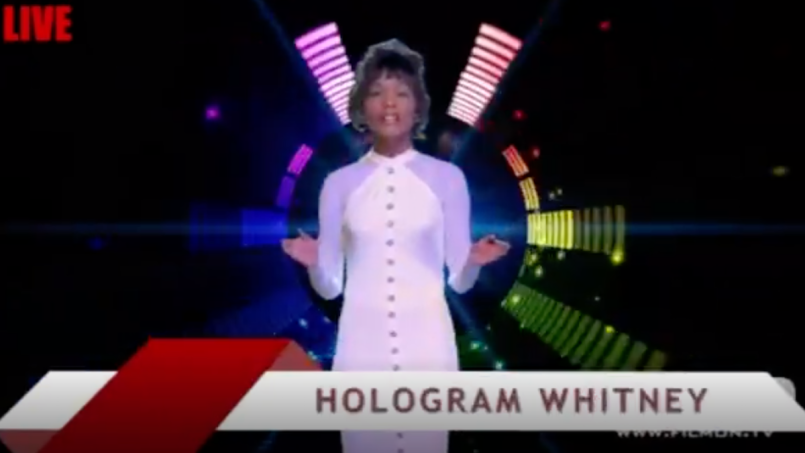 In the pre-pandemic days of early 2020, a Whitney Houston hologram tour debuted in the UK. The concert event was designed by BASE Hologram, but they weren’t the first ones to attempt to digitally reincarnate the late icon. Hologram USA began working on their own hologram of Houston in 2016, and they recently debuted their final creation during a livestream event — without the permission of Houston’s estate.

Hologram USA’s holographic Houston was originally intended to premiere during a duet with Christina Aguilera on The Voice in 2016 ahead of a world tour. However, Houston’s estate canceled the project because they felt the visage “didn’t look like Whitney.” While the estate moved on to work with BASE, Hologram USA founder Alki David continued to “perfect” his scrapped hologram without anyone from the singer’s camp’s knowledge.

As TMZ reports, the rouge Houston hologram made an appearance a little over a week ago during a Scott Storch-hosted virtual variety show on David’s own FilmOn TV. Alongside living guests such as Chief Keef (a known David associate) and Ray J, there were hologram appearances from late icons like Billie Holiday, 2Pac, Notorious B.I.G., Michael Jackson, and Jackie Wilson. Hologram USA’s Holo-Houston introduced the event.

According to sources, David didn’t think he had to involve Houston’s estate in either the completion of the project or its unveiling, as it was his work to begin with. Unsurprisingly, the estate disagrees, and is currently looking into their legal options.

Likeness rights are a closely guarded trademark, and it’s unlikely Houston’s estate would have left language in any contracts with David that would allow him to use the hologram without their permission. Take a look at the potentially offending representation below.

The real Whitney Houston was voted into the Rock & Roll Hall of Fame class of 2020 earlier this year. Though the planned live induction ceremony was canceled due to COVID-19, a pre-recorded special will air on HBO on November 7th.

Meanwhile, the Houston estate has approved of and is producing a new biopic about the iconic singer. Tentatively titled I Wanna Dance with Somebody, it’s coming from director Stella Meghie (The Photograph, Everything, Everything) and screenwriter Anthony McCarten (Bohemian Rhapsody). No word yet on whether a hologram or a live human will portray Houston.