Plus, watch a previously-unseen home video of Johnston writing "When I Met You" 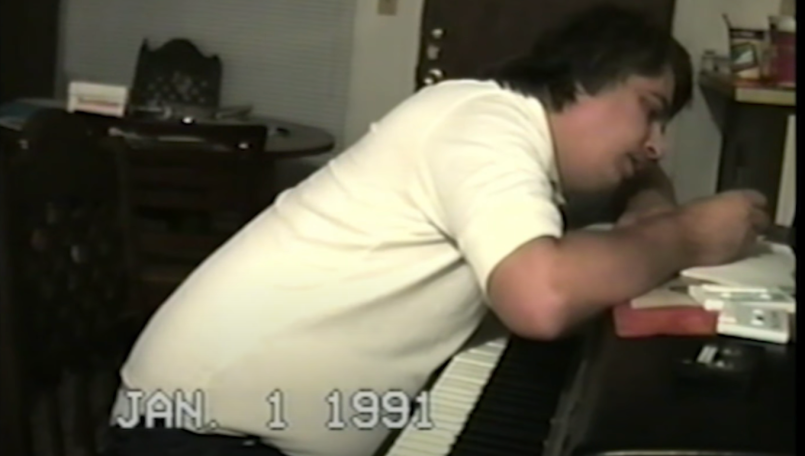 Yesterday mark the one-year anniversary of the death of Daniel Johnston. In honor of his memory, Electric Lady Studios organized “Honey, I Sure Miss You”, a livestream tribute headlined by Phoebe Bridgers, Wilco’s Jeff Tweedy, and Beck. But as it turned out, Johnston himself stole the show in a previously-unreleased home video.

The event was named for Johnston’s 1991 track “Honey, I Sure Miss You”, and was organized with the cooperation of the Johnston estate. The musical memorial opened with a teaser of Johnston playing piano, followed by a few words from the man of the hour: “Hello, this is a recorded message,” it begins. “I am Dan Johnston. Though I am not with you physically, I am with you in heart. With all my heart. And I am thinking about you in hope that you are doing fine.”

Everything led to a pre-recorded performance by Johnston himself. In a home video recorded on New Year’s Day 1991, he played an early version of “When I Met You”, which would eventually land on the 1994 album Fun. In its finished form, “When I Met You” became a sparse a capella recitation. This footage, however, gives an insight into the songwriting process, revealing that he initially conceived those words as a sprightly piano number. The most thrilling moment comes when inspiration strikes. After singing “I want you awful now,” he suddenly breaks off, grabs a pen and writes down a new line. He then struggles with the rhythm over what sounds like, “Time will tell for us somehow,” unhappy with how it goes. He worries away at the keyboard. Then next time through, he sings nonsense “ba da ba” in the new line’s place. A decision has been made — the lyrics don’t end up in the final version. He continues in this manner, playing the song and then stopping to write again. For a long moment of zen, there’s no sound but the slight scratchings of the pen. By the time the video is over, he has gotten two or three lines closer the familiar version of “When I Met You”. Check out the full livestream tribute below.

Many other artists have found time to honor the greatness of Daniel Johnston. Built to Spill put out a Johnston covers album, while Nick Cave, Pearl Jam’s Eddie Vedder, and beabadoobee have covered individual songs. In January, Cage the Elephant, Tunde Adebimpe, and more participated in tribute concert held in Austin for Hi, How Are You Day 2020.