Jack Black and Kyle Gass also discuss how their latest album, getting out the vote, and being responsible quarantine rockers 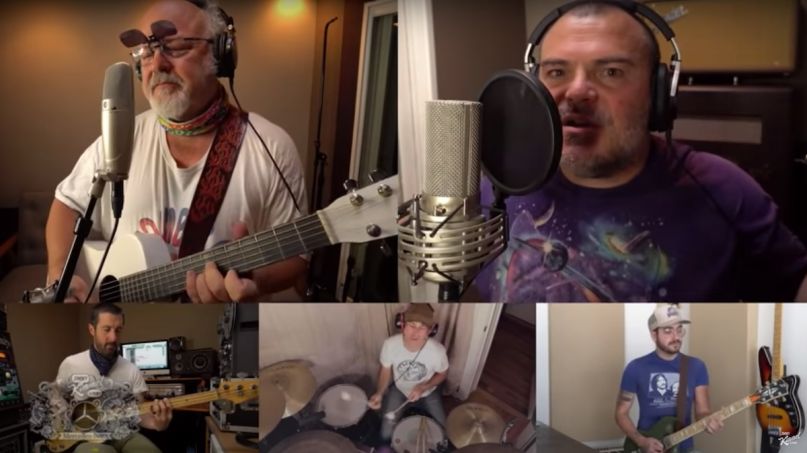 Tenacious D teleported down from their space station on Tuesday night to join Jimmy Kimmel for a late night chat and rock session. The duo of Jack Black and Kyle Gass Zoomed in to promote everything Post-Apocalypto, from their latest album to their newly released graphic novel (which apparently features 96 hand-drawn penises).

Despite causing a ruckus in their own homes (with Black flailing around a Pickle Rick pillow), the D assured Kimmel they were responsible rockers respecting quarantine. “There’s only like three bands that don’t quarantine now,” joked Black, “You’ve got Kanye, you’ve got Smash Mouth, and Kid Rock. But other than that, everyone’s on the same page.”

Black, who was wearing Black Sabbath’s Black Lives Matter shirt, went on to explain how the band’s 2018 album, Post-Apocalypto, was always tied to Trump and politics. “The whole four years, we were like when it comes election time, we’re going to tour all the purple states, all the swing states to rock the vote and literally save the world,” he said. “And this pandemic has totally screwed that up, so our plans have been scuttled… “But the point is we’re here. So instead of rocking all the purple states, we’re just gonna be here with you.”

Before launching into their performance, Black sang a little of “Holding Out for a Hero” while displaying his self-made Biden-Harris poster. Later, backed by their three-piece band, Tenacious D delivered a short medley of “Save the World” and “Post-Apocalypto Theme (Reprise)”. It’s a shame we won’t get to see these two melt swing voters’ faces off, but at least you can replay their Kimmel appearance below.