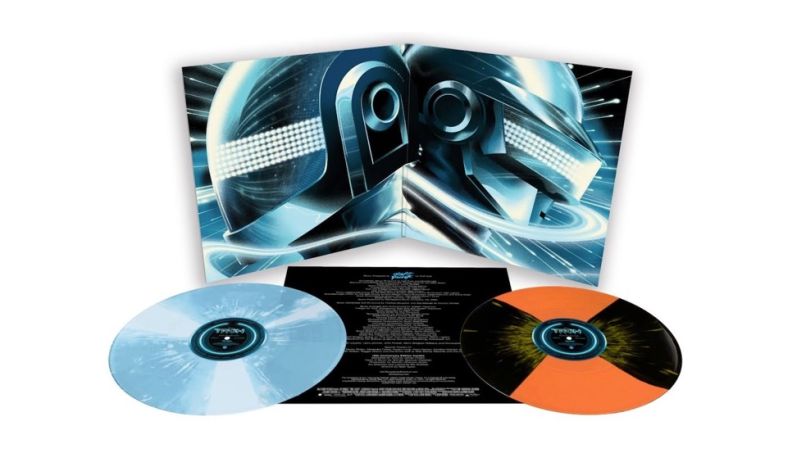 10 years ago, Daft Punk entered Flynn’s Arcade to provide the soundtrack for Tron: Legacy. Now, the French duo’s chart-topping score is getting a deluxe vinyl reissue from Mondo to celebrate the film’s decade anniversary.

Going on sale this Wednesday, September 30th, the new package comes with all the bells and whistles you’d expect from a Mondo release. A direct repressing of the original vinyl release, this expanded reissue includes a number of bonus cuts not present on digital editions of the soundtrack. The one thing that is still notably missing is Daft Punk’s collaboration with JAY-Z, “Computerized”, originally intended as the closing credits single, but ultimately never released.

Where the Mondo reissue really shines, of course, is in the artwork. The front cover from British illustrator Matt Taylor depicts all of the film’s main characters laid out in concentric circles, with the familiar eyes of Jeff Bridges (Flynn/Clu) looming over everything. Apparently, the Mondo team was worried about likeness rights for the artwork, but sent it to Disney for approval anyway. “Then we got an email back saying, ‘Everyone says yes and Jeff Bridges wants a copy,'” Mondo’s Creative Director, Music Mo Shafeek told Collider.

The inner gatefold features the Daft Punk robots themselves in their shiny, white Tron outfits. The back cover lists the tracklist glowing on a spot-varnished keyboard that resembles a particular scene from Tron: Legacy. The soundtrack itself is pressed on digital blue-white and orange-black vinyl. It all comes housed in a slip case with a lone arcade game casting its light on a dark Flynn’s.

Check out all the artwork and the tracklist below. Daft Punk’s Tron: Legacy reissue will be available via Mondo beginning at 11:00 a.m. ET/12:00 p.m. CT on Wednesday.

Recently, news broke that Jared Leto will be headlining a third Tron film, potentially entitled Tron: Ares. Garth Davis is set to direct, and there have reportedly been early discussions with Daft Punk to return for the soundtrack.