"Why? Because it's full of crap just like you, John!" 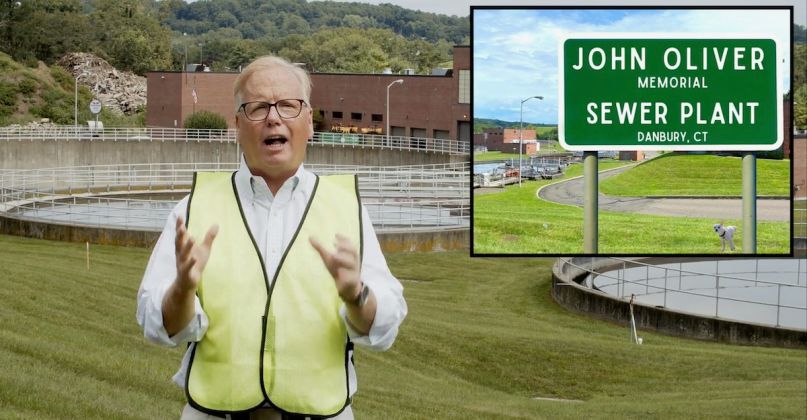 For the last several years, John Oliver has been in a tiff with the city of Danbury, Connecticut. It’s not entirely clear what prompted his war of words, but on at least two occasions in the last three years, HBO’s Last Week Tonight host has ruthlessly mocked the New York metropolitan suburb. In 2017, he took aim at Danbury for going to absurd lengths in hopes of winning a bid to be Amazon’s headquarters. In a more recent episode, in which he explored racial disparities in the jury selection process of two Connecticut cities, Oliver again singled out Danbury.

“If you’re going to forget a town in Connecticut,” Oliver remarked, “why not forget Danbury? Because, and this is true, fuck Danbury!”

“I know exactly three things about Danbury,” Oliver added. “USA Today ranked it the second-best city to live in in 2015, it was once the center of the American hat industry, and if you’re from there, you have a standing invite to come get a thrashing from John Oliver — children included — fuck you.”

Now, Danbury has responded in kind by renaming a local waste sewage plant in honor of Oliver. “We are going to rename it the John Oliver Memorial Sewer Plant,” Danbury mayor Mark Boughton announced in a video released over the weekend. “Why? Because it’s full of crap just like you, John!”

In the video, Boughton also thanked Oliver for the “Amazon video,” as Danbury is now home to one of the company’s distribution centers.

Update: Though he made no mention of the new sewage plant that bears his name, Oliver did reaffirm his hatred for Danbury during last night’s Last Week Tonight. While recapping last week’s Democratic National Convention, Oliver said as an aside, “I had no idea that calamari was Rhode Island’s official state appetizer. It might be the first thing I’ve learned about that state that I’ve actually liked, aside, of course, from the fact that it doesn’t include the city of Danbury, Connecticut. Because, I’ve said it before and I’ll say it again, fuck Danbury. Babies. Elderly. Pets. Buildings. All of you can go fuck yourselves.”

(Language warning)
Well @iamjohnoliver a 4th thing to know about Danbury: we have a hockey team! And since you’re a fan, we’d like to offer our own “standing invite” to watch us thrash the rest of the FPHL in our newly renovated Arena. DMs are open. See you soon @LastWeekTonight! pic.twitter.com/L4D8UDfnFX