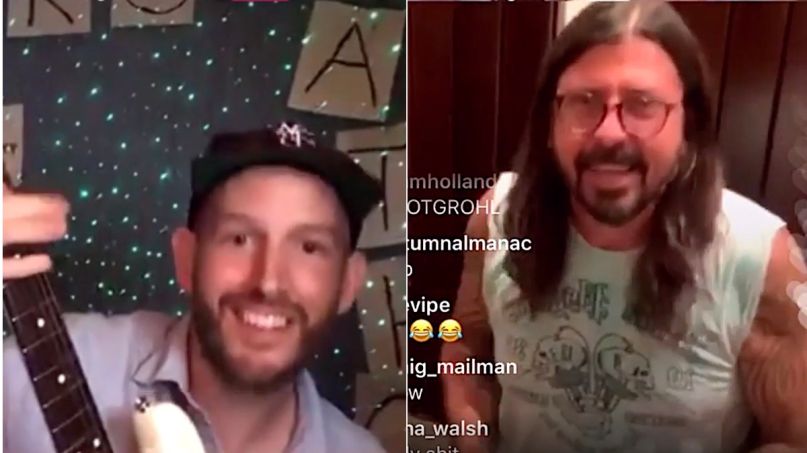 Philadelphia musician Pat Finnerty has spent quarantine hosting an Instagram Live show in which he tries to learn every part of a classic song in one hour. Knowing he was a big Dave Grohl fan, a friend who watched the livestreams sent him a cardboard cutout of the Foo Fighters rocker to join in the videos. The fake Grohl became a constant companion, Finnerty told Rolling Stone, even joining him during a socially distant rooftop concert. But soon Finnerty became obsessed with playing with the real Grohl.

That’s when he decided to host the 24-hour “Grohl-A-Thon”, a special edition of his Instagram Live show with the express intent of reaching Grohl himself. The goal was to get the Foo Fighters frontman to sing on Dire Straits’ “Money for Nothing” — a punchline to a long-running joke for Finnerty.

Nine hours into the stream, his commitment paid off. As the “Grohl-A-Thon” rolled along, featuring guest appearances by the likes of Jon Wurster and director Ben Berman, it gained some viral traction and eventually Finnerty received a video request from actor Andrew Sikking, who was attending a dinner party at Grohl’s house that night. When Finnerty accepted the join request, he was connected to a phone facing a drum set, and who was playing but Dave Grohl himself.

The ploy had worked, and Finnerty got to spend 20 minutes with his idol, who ended up singing the “I want my MTV” line from “Money for Nothing” to an ecstatic Instagram audience. “That’s it? That’s all you wanted?” exclaimed Grohl, who went on to play drums on the song, as well as stick around to chat for a while.

To end his impromptu interview/hang, Finnerty asked: “Is it good to be Grohl?”

Indeed, it has been a positive quarantine for Grohl. When he hasn’t kept fans entertained with stories from his past, he’s dropped in to surprise and serenade front-line nurses, continuing his MO of being an unbeatably upbeat presence even in dark times.

Check out Grohl’s appearance on the “Grohl-A-Thon” below.

Thanks to everyone on Team Grohlathon for pitching in and especially @cestclairemusic for screenshotting this after my phone died. WE GOT GROHL

We got Grohl. Thanks Grohl.