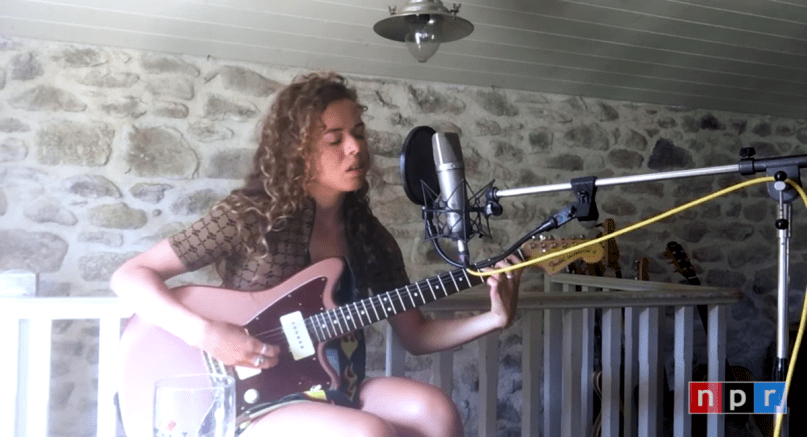 Nilüfer Yanya landed on both our Top 50 Songs and Top 50 Albums of 2019 lists thanks to her incredible debut album, Miss Universe. Today, she’s made her return to the spotlight with a new song, “Day 7”, which she premiered a performance for NPR’s Tiny Desk (Home) Concert series.

This is technically Yanya’s second entry in the Tiny Desk catalog. Last year, the English artist visited the NPR headquarters to play a full-band Tiny Desk set featuring three tracks from Miss Universe. For this new edition, which was recorded at a studio in Cornwall, England, she turned in a solo performances of three other songs from that record: “Heat Rises”, “Paralysed”, and “Heavyweight Champion of the Year”. In between the familiar tracks, she unveiled “Day 7”.

Like her previously released material, “Day 7” is a totally idiosyncratic blend of soul, pop, R&B, and indie rock. The verses are centered around her uniquely powerful vocal delivery, while its hook places catchy “yeah-yeah”s over snappy guitar chords and a playful lick. The song comes in around the 7:43 mark in the video below.

The video also saw Yanya offering a message of solidarity for those who are taking a stand against racism and injustice worldwide. The protest movement that’s erupted in the months since George Floyd’s murder are of particular significance to Yanya, who’s of Turkish, Irish, and Barbadian descent.

“One of the things that’s been on my mind a lot is the racism and violence and injustice going on towards Black people and people of color, not only in America but here in the UK and all over the world,” she said after her first song (“Heat Rises”). “As a person of mixed heritage, this issue is something close to my heart. I see the people being hurt as my family, my friends, and I urge you to see it the same way. I think that’s the only way we can work towards solving it.”

She then went into “Paralysed”, saying, “I feel like [it] relates right now, but I’ve never actually performed before, even though it was on my record last year.” Watch the full Tiny Desk (Home) performance below.

Back in April, Yanya contributed a Giles Peterson remix of her song “Baby Blu” to the vinyl benefit compilation Songs for the National Health Service, which funded PPE for NHS workers on the frontlines of the pandemic. Back in 2019, Yanya appeared on an episode of our This Must Be The Gig podcast to discuss the making of Miss Universe, performing live, and more.