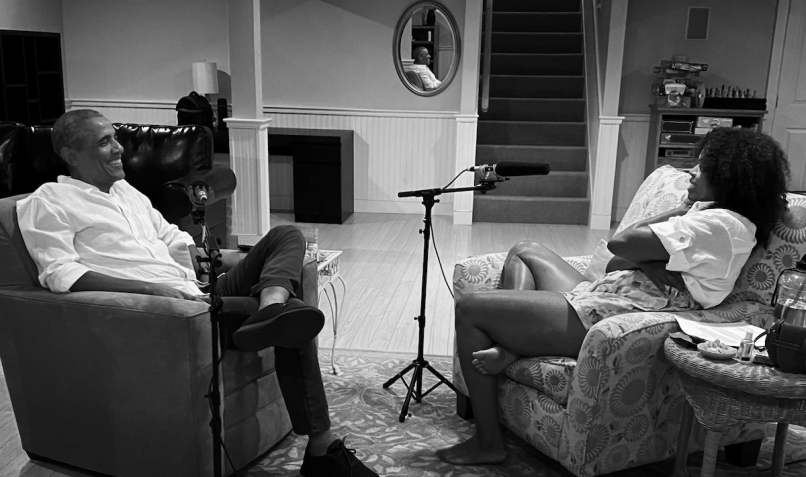 The Obamas recording their podcast episode, photo via Spotify

Former First Lady Michelle Obama has released the inaugural episode of her new Spotify podcast series, and it features a very special guest: husband and former president Barack Obama. Over the course of the 49-minute debut episode, America’s favorite power couple discuss their respective upbringings and childhoods, as well as important current events and social issues such as the coronavirus pandemic, the Black Lives Matter protests, and the 2020 Presidential Election.

Early on, the Obamas spoke about their childhoods and how their neighbors helped raise them to become the responsible adults they are today. The reminiscing was connected to a larger conversation about the vital role of community.

“That was a really common theme,” the former POTUS recalled “Ms. Smith down the street, she’d see me messing up. She’d scold me … Then when I got home, I might get whooped because Ms. Smith would have called my mom.”

The pair recognize the significance of community and collective responsibility during this given moment, as protests still continue across the country in cities big and small. “The good news is, that when you look at all these young people who’ve been out there protesting in the wake of the George Floyd murder, that’s their instinct,” Barack commented. “It’s not uniform, and it could still go both ways in this country just like its teetering one way or the other in countries all around the world. This is not unique to the United States, it’s we just got our own version of it.”

Even though protesters are still taking to the streets on a regular basis, the former First Lady is concerned how that energy will translate to the polls — specifically when it comes to younger generations, who may feel the voting process and politics as a whole have failed them. She explained,

“The only thing that worries me, and I agree — in terms of the hope that I feel when I look at young people — just how they were raised, the values, their exposure, the questions that they have, the change in the economy that’s forcing them to ask a certain set of questions, that give me hope. But the thing that I worry is that I hear, I think, too many young people who question whether voting, whether politics is worth it.”

“I know a lot of you are hurting out there right now and are confused and that’s okay,” Michelle continued. “But as I’ve seen, as Barack has seen, we can take that anger, that disappointment and turn it into something useful. Perhaps, even something hopeful.”

The first episode of The Michelle Obama Podcast also featured a funny bit about the couple’s time spent in lockdown mode. “Like most Americans, we’ve been spending a lot of time together in quarantine,” the former First Lady said.

“You don’t seem too happy about that, the way she said it, right?” joked her husband.

“It’s just a fact,” Michelle replied with a laugh. “There wasn’t a judgment. We’ve been together …”

Barack added that he’s “been loving it”, to which his wife responded, “Yeah, I’ve been having a great time. But we’ve had some interesting conversations … ‘Cause these are some crazy times.”

Stream the full inaugural episode of The Michelle Obama Podcast below. Future episodes will premiere on Spotify each week and promise additional guests in Conan O’Brien and Michelle’s own brother and mother.

Michelle’s first podcast series follows her Netflix documentary Becoming, which was based on her own best-selling memoir of the same name. She recently (virtually) hosted The Roots Picnic, as well as a weekly story time series for children. Michelle will next participate in Lollapalooza’s four-day festival livestream.

Editor’s note: If you enjoy podcasts, also consider checking out some of the programming found on our own Consequence Podcast Network.