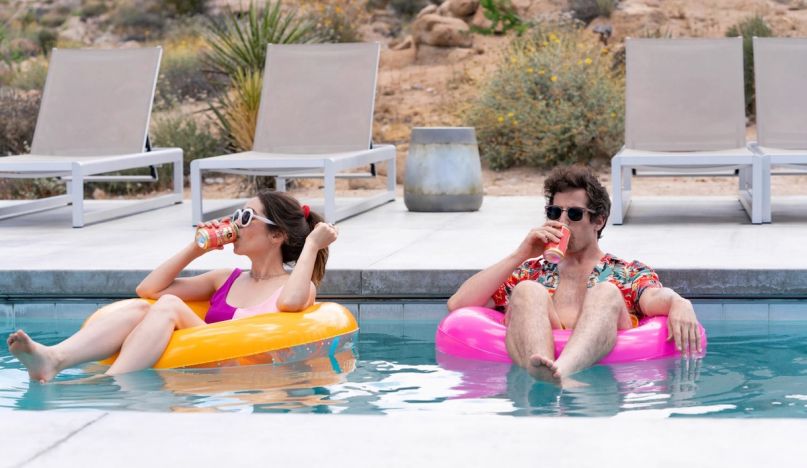 When was the last time you experienced pure, unbridled joy? It’s clearly been some time, and Hulu’s latest success story is proof. As IndieWire reports, Andy Samberg’s newest film Palm Springs has smashed the platform’s opening weekend streaming records, proving that we’re all quite desperate for the twin balms of romance and laughter.

Palm Springs was directed by Max Barbakow and written by Andy Siara. Set in the titular idyllic California town, it stars Saturday Night Live alum Samberg and Cristin Milioti, who you may remember as the panicked crew member trapped aboard the USS Callister from Black Mirror’s fourth season. It’s an earnest, warmhearted take on the time-loop format; think Groundhog Day meets When Harry Met Sally, set against a hazy desert sky. Sure, we’d all love to be luxuriating in inner tubes in a pool right now, but not when we’re forced to relive a millennial wedding every single excruciating day, flower crowns and all.

Samberg himself praised the movie’s sincerity, telling Consequence of Sound that it “just had its own voice, its own tone, its own opinion, and it was working. It was smart and it wasn’t talking down to the audience.”  Part of that fitting tone can also be attributed to Samberg’s real-life wife and master harpist, Joanna Newsom, who provided vital input on the movie’s music.

Social media, too, helped propel the movie’s record-breaking numbers. Palm Springs first debuted at the 2020 Sundance Film Festival, where Hulu purchased the distribution rights for $22 million. That social media buzz hit its peak when Hulu began streaming the film on July 10th — Twitter users chatted so much about the movie, it became Hulu’s most talked-about opening weekend release. Tweets lauding the movie noted its refreshing, sentimental qualities, and Samberg and Milioti’s magnificent on-screen chemistry. Find some of those tweets below.

And in case you don’t yet have a Hulu account, you can sign up for a free 30-day trial and momentarily ease those lockdown blues with a Palm Springs viewing party of your own.

PALM SPRINGS is terrific and you should watch it.

Please watch Palm Springs on Hulu tonight. I absolutely adore this movie. One of the most unique romcoms I have ever seen- totally transcends the genre and takes it to new levels. Also, Andy Samberg and Cristin Milioti are magical✨ #PalmSprings pic.twitter.com/CgTqXgX5uK

out of context Palm Springs GIF that should come in handy in the future pic.twitter.com/yitbEXX6IZ

So I think Palm Springs is my new favorite movie?

I’m giddy over here. I get this very specific feeling that’s equal parts delight and envy when I see something this good. It checks all my boxes. What a perfect treat. pic.twitter.com/Qb26Z3biD7