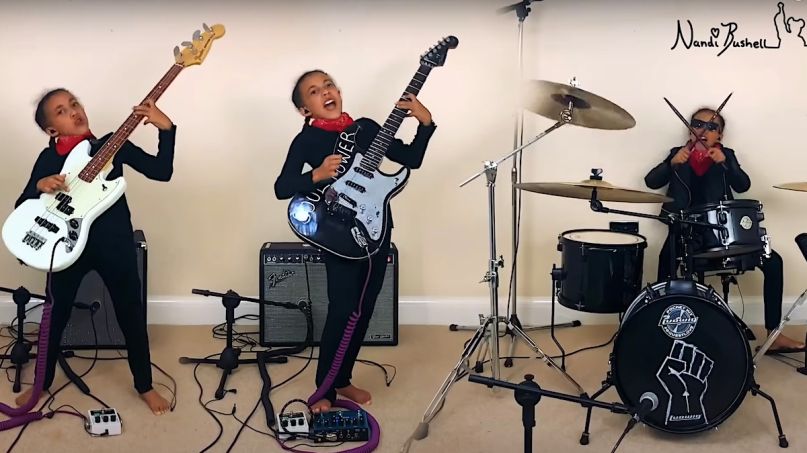 Ten-year-old musician Nandi Bushell has made great use out of a guitar that was just gifted to her by Tom Morello, performing the Audioslave hit “Cochise” in her latest YouTube video. Not to mention, she also rocks the drums and bass in the impressive clip.

Nandi previously wowed Morello with a performance of Rage Against the Machine’s “Guerrilla Radio”, in which she also played all three instruments. The RATM guitarist was so impressed that he shipped her one of his new Fender Soul Power Stratocaster signature guitars, along with delivering her a personal video message.

Instead of putting the guitar in a display case, Nandi did what every good young rocker should do, and jammed Audioslave’s “Cochise” with the Stratocaster. A fitting choice considering that the Soul Power is modeled after the guitar Morello primarily used as a member of Audioslave.

Nandi, whose main instrument is drums, gave a shout out to RATM / Audioslave stickman Brad Wilk, as well as Morello, in the YouTube description and on her social pages: “Dear @tommorello and @bradwilk, thank you for always supporting me. I made this cover of #Cochise for you both. @tommorello I LOVE my new #soulpower @fender #guitar! It’s AMAZING!!! #audioslave wow! So Good! Thank you!”

Audioslave — featuring Soundgarden’s Chris Cornell and Rage Against the Machine’s Morello, Wilk, and Tim Commerford — released three albums from 2002 to 2006. “Cochise” was the first single off their self-titled debut.

Check out Nandi’s performance of “Cochise” below, and pick up a Fender Soul Power Stratocaster for yourself or the young musician in your life here.