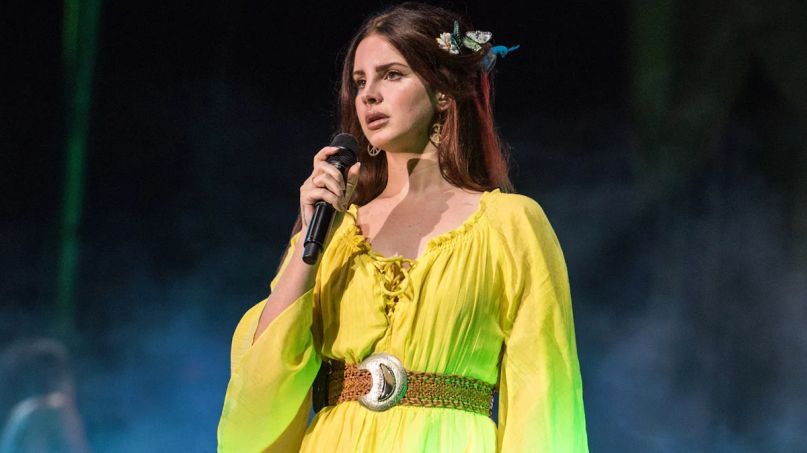 Lana Del Rey has been teasing the release of a poetry collection and companion spoken word album called Violet Bent Backwards over the Grass since the beginning of the year. Now, she has revealed the release dates for the two projects.

The accompanying “audiobook” is due out on July 28th. CD and vinyl editions of the spoken-word album will arrive on October 2nd.

The audiobook will see LDR reading 14 selections from the Violet Bent Backwards, with backing music provided by frequent collaborator and friend Jack Antonoff. Some of the poem titles include “LA Who Am I to Love You?”, “The Land of 1,000 Fires”, “Past the Bushes Cypress Thriving”, “Never to Heaven”, “Tessa DiPietro”, and “Happy”.

In a statement accompanying the listing, the singer said,

“Violet Bent Backwards over the Grass is the title poem of the book and the first poem I wrote of many. Some of which came to me in their entirety, which I dictated and then typed out, and some that I worked laboriously picking apart each word to make the perfect poem. They are eclectic and honest and not trying to be anything other than what they are and for that reason I’m proud of them, especially because the spirit in which they were written was very authentic.”

Back when the album was expected in January, Del Rey said that half the proceeds would be going towards Native American charities. In her latest Instagram post, she wrote about the Navajo Water Project, indicating that’s where donations will be heading. She said she hopes to help the initiative reach its over $1 million fundraising target for the year within “the next 4 weeks,” adding, “and we’ll be traveling throughout New Mexico Arizona and Utah to say hello and make sure it gets done.” Find the post below.

Violet Bent Backwards is the first of two such book/audiobook pairings Lana Del Rey has in the works. The second, behind the iron gates – insights from an institution, is expected in March 2021. She shared a recording from that collection, “patent leather do-over”, back in May.

LDR has also hinted at a true follow-up to 2019’s critically acclaimed album, Norman Fucking Rockwell!, dubbed, Chemtrails Over the Country Club. She previously said it would be released on September 5th.

All of this comes after a series of unfortunate headlines for Del Rey earlier this spring. In a post announcing the Chemtrails release date, she made some unfavorable comparisons to other female musicians — mainly Black women like Beyoncé, Cardi B, and Doja Cat — while attempting to argue against accusations that she “glamorizes abuse.” She spent the next week trying (and not entirely succeeding) to clarify her point, only to cause more stir at the end of the month when she posted video of looters to her Instagram.

Dates for the release of the audiobook and the physical book tomorrow! Also you should know about – Navajo Water Project www.navajowaterproject.org 1 in 3 Navajo still don’t have a sink or a toilet. That means 1/3 of Navajo families haul water home every day. They pay 67 x more for the water they haul vs. piped water. Access to running water has become more important than ever during the COVID-19 crisis. In May, the infection rate in the Navajo Nation — at roughly 2,500 per 100,000 residents — surpassed that of New York. The Navajo Water Project brings clean, hot and cold running water to families across New Mexico, Utah and Arizona.The installation of a water and solar system takes just 24 hours from start to finish. The Navajo Water Project has a fundraising target of $1,035,000 for 2020 to bring running water and solar power to 230 families. and we plan on fulfilling that target in the next 4 weeks to bring it up to their million dollar mark, and we’ll be traveling throughout New Mexico Arizona and Utah to say hello and make sure it gets done. The Navajo Water Project is Indigenous-led, and registered as an official enterprise on the Navajo Nation. Their work creates meaningful, high-paying jobs, many with benefits like 100% employer-paid health coverage.