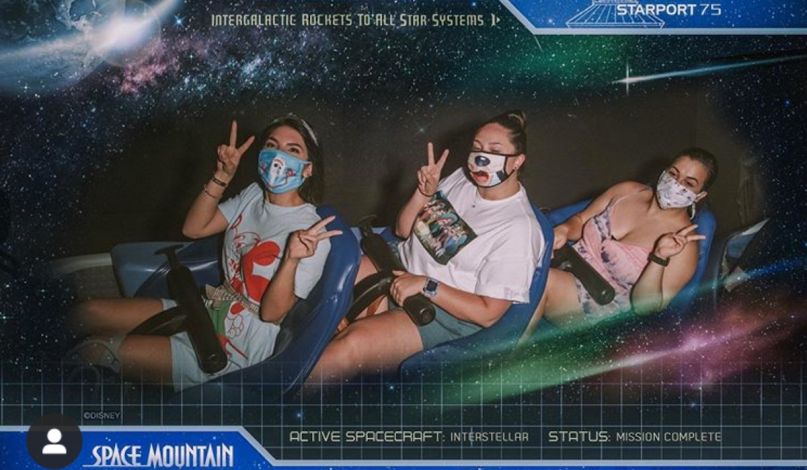 Despite Florida’s record-breaking rise in coronavirus cases, Walt Disney World’s Magic Kingdom and Animal Kingdom in Orlando reopened this past weekend. The theme parks operated with new guidelines in place for guests, including required masks, temperature checks and socially-distanced queueing. Disney World is taking the mask requirement so seriously, in fact, that it’s refusing to sell customers their ride photos if they’re not wearing some kind of face covering while on the ride.

A public relations person for Disney confirmed this new rule to CNN on Monday, but said that the company has always had a policy of “suppressing photos if someone is doing something unsafe on the ride.” Enjoying popular rides like Splash Mountain and Space Mountain without a mask is considered hazardous to others and thus consistent with the park’s policy.

While social media posts from the weekend showed some guests crowding unsafely and cast members not wearing face masks, the pandemic-era ride photo policy seemed to be enforced. Official Disney photos posted to Instagram feature riders abiding by the rules and wearing their masks while wildly flailing their arms. It’s true, Trump and mask conspiracy theorists: you can actually have fun and still care about the health and safety of others… at the same time.

Maybe it isn’t the most convenient way to enjoy a roller coaster, but it’s better than not being allowed to scream at all while on a ride, which is what Japan’s been doing to curb virus cases.

Of course, even with these guidelines in place, Disney’s decision to reopen is a pretty troubling one given Florida’s recent surge in COVID-19 cases — especially this past weekend. According to CBS News, the state just set a new record for the largest number of cases in a single day since the start o the outbreak. On Sunday, Florida reported 15,299 in a 24-hour period — that’s more than the previous record of 11,571 cases in New York, once the epicenter of the crisis.

Check out photo and video footage of Disney’s rides from this past reopening weekend.