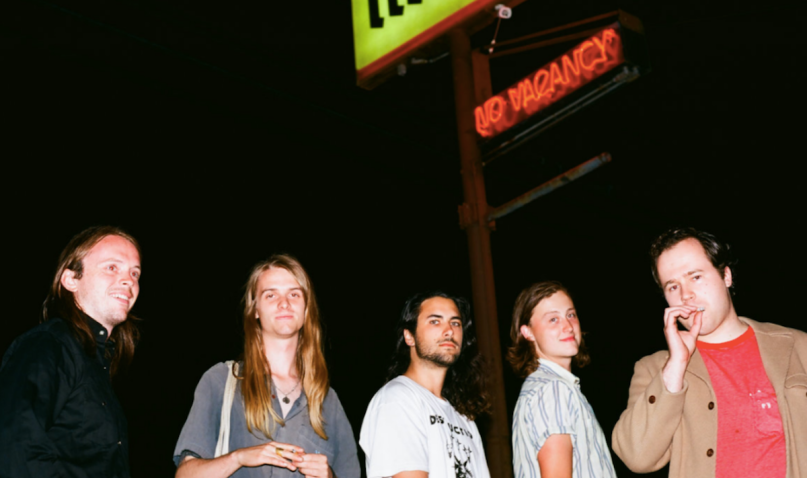 Advertisement, the buzzworthy rock band band out of Seattle, have shared their debut album American Advertisement. Stream it below via Bandcamp.

American Advertisement was recorded and mixed by Trevor Spencer and mastered by Jack Shirley. Musically, it’s both nostalgic and of-the-moment; nostalgic for the delight in guitar-driven rock and roll, but with modern lyrical concerns that recall Seattle as it exists today.

The new LP also sounds post-legal weed, chilled out and occasionally psychedelic, but there’s an anger, too; a social awareness shaped by the tech-bro invasion and having witnessed the slick gentrification and dull luxury condos crowding out the waterfronts. While the overall vibe is sunny, life-affirming fun, American Advertisement is interrupted by flashes of paranoia and pain.

In a statement on their Bandcamp page, Advertisement explained that 100% of proceeds would benefit the Trans Women of Color Solidarity Network. They wrote,

“As a band of all white people, we recognize that all relevant American music, art, and culture are based directly upon the unacknowledged genius and work of Black people. As such, we will redirect 100% of the money made off record sales to the Trans Women of Color Solidarity Network. We are committed to doing the life-long work of decentering our financial success and, instead, using our profile and social capital to center the material well-being of Black people in our community. Specifically, we are committed to supporting Black and Indigenous Trans and Two-Spirit people, who deserve not only a life without violence, but also a life full of endless opportunity and free of burden.”

American Advertisement is available to stream and purchase below.