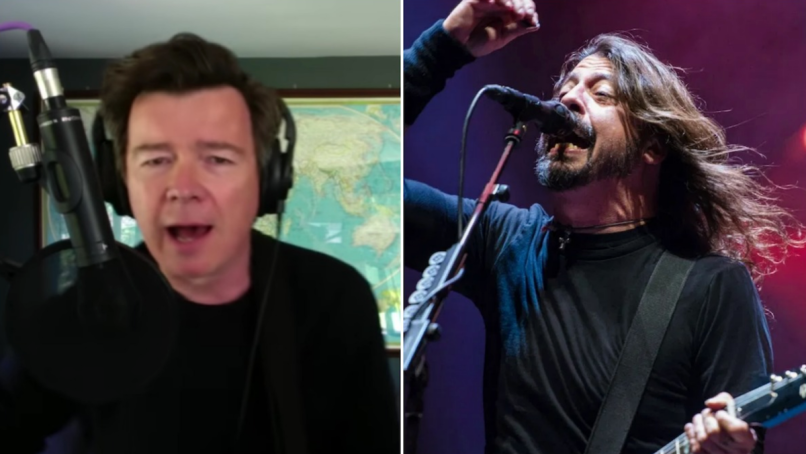 During a 2017 concert in Japan, Foo Fighters epically RickRolled their own fans by bringing out special guest Rick Astley for a collaborative performance of “Never Gonna Give You Up”. (Dave Grohl even introduced Astley as “the most badass motherf*cker”.) Never giving up on the Foos, Astley has now returned the favor by covering their catalog classic “Everlong”.

A faithful acoustic rendition, the performance was filmed in what appears to be Astley’s own quarantine home studio. “Sometimes you just have to find the song that’s gonna lift your spirits and put you in another place, and I’ve been doing that a lot recently with music,” the 54-year-old English artist said in the clip, prior to playing the 1997 Colour and Shape single. “One of the bands I always go to, believe it or not, is Foo Fighters.”

Watch the video footage below. Update: Astley has also released the song via digital streaming platforms, including TIDAL. Those new to TIDAL can get an exclusive 60-day free trial through Consequence of Sound.

“Never Gonna Give You Up” appears on Astley’s 1987 album, Whenever You Need Somebody, and that’s up for purchase here. The Foos’ The Colour and Shape can be snagged over here.

Although Astley and the Foos’ 2017 onstage collaboration didn’t reach RickRolling meme levels, it still came with a fun backstory. Speaking to Kyle Meredith With… the following year, Astley recounted how he and the Foos crossed paths at Japan’s Summer Sonic Festival,

“A big fan of the Foos, Astley camped out backstage for the rock band’s performance, and was soon approached by Grohl himself. “It just all went nuts. Dave Grohl came over and said hello, gave me a hug, said hello, and then a half hour later he’s inviting me onto the stage,” he explains. “I never met them, I have no why idea why he’d invite me onstage. I didn’t know what it was all about. And then he just kind of whispered and said, ‘We’re doing your tune, but we’re gonna do it like Teen Spirit,’ and that was it. And off we went.”